Getting Ready for the Baby, and Birman Legend

Waiting for our Birman kitten to grow big enough to come home with us gave me time to sew a few things for her.  It’s not as if she needed a “layette” as such, baby knitting and sewing little baby nightgowns as I did for my own babies all those years ago.   But I did a little sewing, never-the-less, of pussy cat items.  A while ago I had acquired a grey fleecy blanket which I cut up and hemmed to make half a dozen smaller blankets.  These have been placed in her carry cage, one in her cat tower, one in her little basket, and the others will be handy I’m sure. 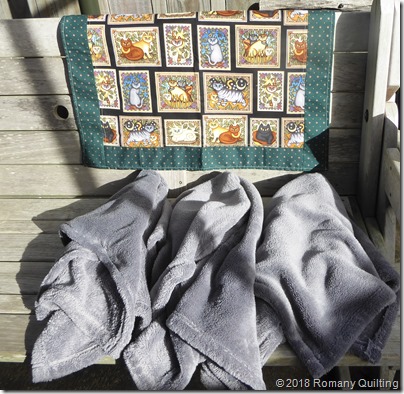 Out of a half yard cut of cat fabric I made two “placemats” (about 26in X 18in).  One of these is under her feeding station, and the other is under her dirt box.  A good way to use up some cat fabric which I’d had for ages. 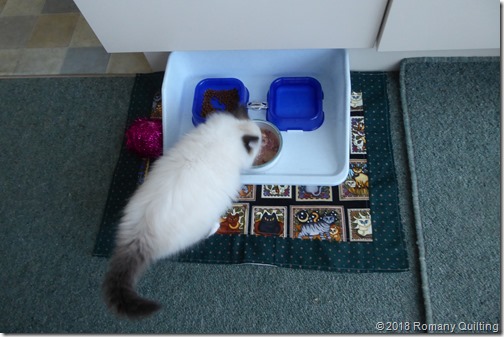 Most family members have “hand-me-down” items and I have re-used the little bag I originally stitched for our previous cat Muffy.  Freshly washed and pressed, it holds such things as her brush and comb. 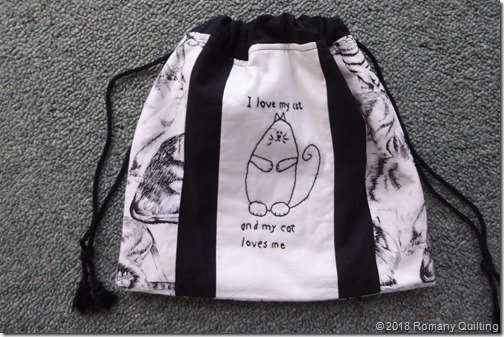 And this handy little mesh bag holds Gemma’s toys – this was a little purchased bag.  So far she hasn’t learnt to roll the little balls along the floor and chase them, but it’s early days yet. 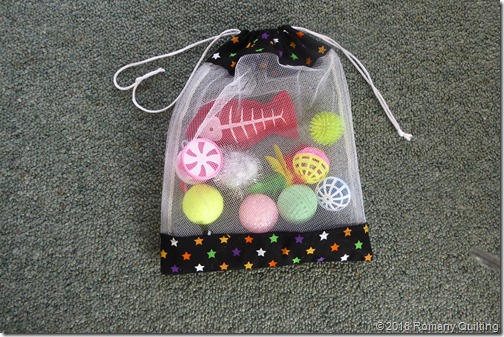 Gemma loves playing in her little tunnel, and has just discovered her cat tower.  Robin and friend Derek made this and covered it in carpet.  We will have to impress on her that yes, she can scratch and climb all over this, but not on the furniture. 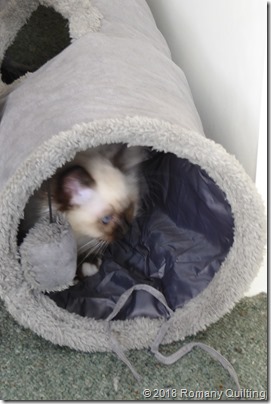 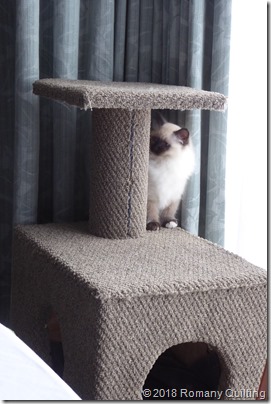 Have you heard of the “Legend of the Sacred Temple Cats of Burma”?  It goes like this:

“Many centuries ago the Kymer people built beautiful temples to worship their gods.  One such temple housed a beautiful golden goddess with sapphire blue eyes, who watched over the transmutation of souls, which means, to change into another form.  Mun-ha, one of the most beloved of priests, often knelt in meditation in front of the golden goddess with Sinh, one of the white temple cats, always at his side.  As the priest prayed, the sacred cat would gaze at the brilliant goddess.

One night raiders attacked the temple and Mun-ha was killed.  As the priest died, Sinh placed his feet on the body of his fallen master and turned to face the golden goddess.  Immediately the hairs on his white body turned golden, her beautiful blue eyes became his very own, and his white legs shaded down to a velvety brown.  But where his feet rested on his dead master, the whiteness remained white, as a sign of purity.

By the next morning the other one hundred white cats had been transformed like Sinh.  This faithful cat died seven days after his master, and carried the priest’s soul with him into Paradise”.

One very loved and spoiled kitty cat. Loved the tale too x

Gemma has the most loving home,and a layette fit for a princess all sewn and waiting for her to arrive.

sounds like this is going to be one spoiled kitty :)

Such a lucky kitten to have a home where she was loved even before she arrived. The placemats and cuddle blankets are wonderful ideas.

Now that is a lovely collection to welcome Gemma. So precious.

So nice for you both to have Gemma.. She's very cute. She has a great Mum and Dad to have made her lovely blankets, placemats and climbing pole.

Lovely to see that you now have Gemma, Buffy is a beautiful memory but Gemma is in the here and now. Guess it will not be long before we see her in a harness and in your caravan off on lots of adventures with you both. Think of you often, cheers, Rieann from Western Australia.

Thank you all, so nice to get your comments. And Rieann - you come up as a "non reply blogger" so I cannot reply directly. Thank you for your good wishes, and yes, Gemma will be joining us on caravan adventures soon.

That legend is wonderful Jenny. The simplicity of the writing is always touching.
How sweet you are to sew little kitten/cat things in preparation. These very big dogs do not inspire such but I did sew basket and bed blankets for both the little shih-tzus I had before.