Slow Stitching and Stirring the Pot

It’s nice to sit and relax with some hand stitching.  I like to sit at the dining table when I stitch during the afternoon and the Autumn sunshine comes through the sun filter curtains.  Nice and warm, but not too hot.  I did a little hand quilting on my Winter Quilt Festival panel, stitching around the teeny tiny printed block patterns which surround the centre panel.  I’m not the world’s best or fastest hand quilter, so this could take me a while.  But no hurry, I’m quite enjoying this project. 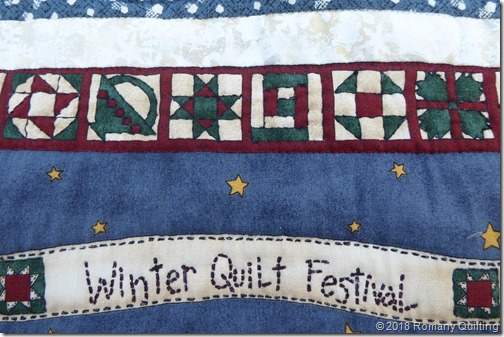 Then I made a start on block number five (of nine) of the New Zealand Botanical designs I’m doing – another slow stitching project.  This is the Alpine Buttercup block, and I have just started stitching the base of the wreath.  I like to take this type of stitching away on caravan trips, and to the Sew Wot morning get-togethers. 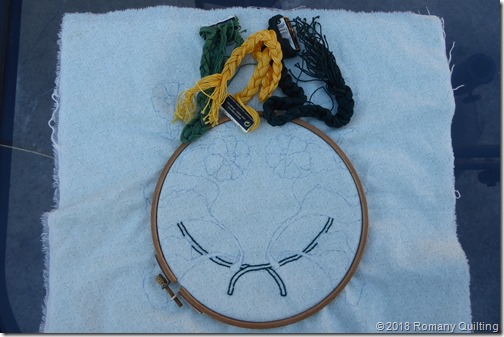 Then I had a stint of jam making, stirring the big stock pot full of feijoa jam.  It’s feijoa season here, and feijoa trees in home home gardens (not us) usually have fruit to share and give away. This fruit is not to everyone’s taste, Robin doesn’t care for them, but I rather enjoy them. 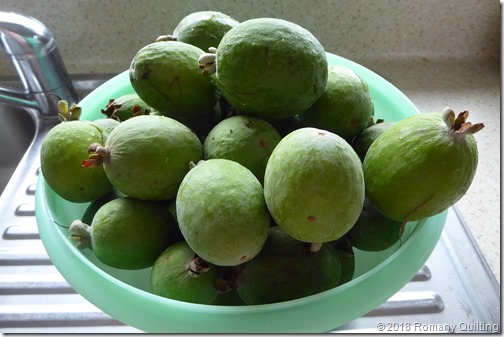 I had an awful lot of fruit to cut in half, and scoop the golden/caramel coloured  flesh out with a tea spoon.  You can’t weigh the whole fruit, only the flesh.  Quite a long, slow job, but finally it was done.  And this is the result, several jars of yummy feijoa jam.   I like to use the fancy jars, such as these square of six sided ones – doesn’t really make the jam taste any nicer, but I like the look of them in the pantry.  Just another of my little foibles! 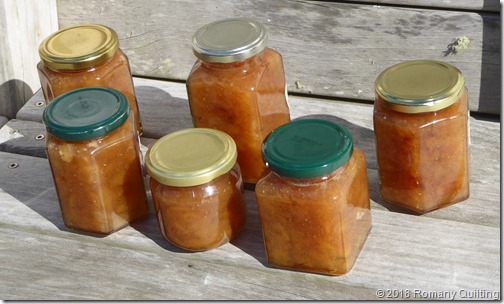 So along with washing, ironing, and preparing an easy evening meal cooked in the crock pot, that was how I spent my Sunday.  What did you get up too?
Posted by Jenny at 9:59 AM

Is there a fruit that you could compare the taste of feijoa jam to? I am wondering what it would taste like I have not heard of this one before. My Sunday was a rainy day that was rather cool and I stayed in the house with only venturing out for a short bit. I quilted and I pieced and made supper using the oven as I was a little chilly in the house - our warm spring April that we normally get is almost over and we have only had a few warm days - spring warmth is slow coming - I have a feeling it will go straight to hot summer when it arrives.

Feijoas taste rather like a soft pear, and have a gritty texture, which some people don't care for. The trees usually fruit quite prolifically, usually too much fruit for a small household to consume, that's why we often pick up a bag or two for nothing.

I hear what you are saying about the jars!! Me too, I love the cute jars, my favourite is the roses marmalade jars. LOL
Did you keep the feijoa skins? Try this recipe...
https://lovefoodhatewaste.co.nz/recipes/feijoa-skin-muffins/
Yummy!!
Enjoy your sewing.

Great work with your stitching. Looks like you have the perfect place to enjoy the afternoon sun.
I can imagine it would take a while to prepare the fruit for the jam as the are not very big. I quite enjoy the taste of feijoas. Does it come through well in the jam.

I've never heard of this fruit, so thank you for explaining how it tastes. I bet your jam is tasty! It's such a pretty color.

Enjoyment is the key! I have never tried feijoas....homemade jam is always nicer x

I have that same winter quilt festival panel. It is in my deep stash and waiting to be made into something. Hand quilting is definitely a journey not a destination...you will get there eventually!

I had never heard of that fruit either. I love pears and make pear butter (like applebutter)when I can get them cheap.

You can count me as another very slow quilter. It sometimes takes me a year or more to quilt a full sized quilt. (This is why I give in and have a LAQ do many of my quilts.)

This fruit is new to me too. It looks yummy.
Your latest quilt is lovely, Jenny, and you are so right...the white dashing really sets off the blocks.

A productive time. Yummy jam. The feijoa tree we sometimes have access to didn’t fruit this year. I think it has been too dry. Maybe another time. They were rather tasty when we did get to try some.