Stitching during the Storm

She may have been downgraded by the weather people, but Cyclone Gita still packed a punch.  To prepare for her arrival on Tuesday we moved from the Golden Bay area  to Marchwood Park camp in Motueka. and hunkered down.   The heavy  rain arrived on Tuesday morning, noisily beating down on the caravan roof.  The puddles started to join up into a rather large lake outside our van, across the roadway, and across the camping area to the side of us. Then the winds arrived, sudden gusts kept shaking the van, and I for one was certainly worried what the night would hold.  We cooked and ate the evening meal, watched the TV news, seeing the devastation which Gita had brought to some areas of the country.   Eventually as the evening drew on, the wind started to die down a bit, perhaps Gita was moving on? 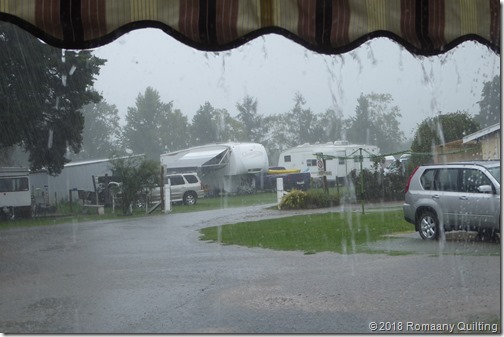 During our day tucked up inside the van we checked the news and weather reports on TV, read some blogs, flicked through a magazine,  and I did a bit more on my stitching.  My bits and pieces are tucked  away in my sewing pouch.  I diligently stitched on for a while, but I must admit it was hard to settle with worrying about the storm. 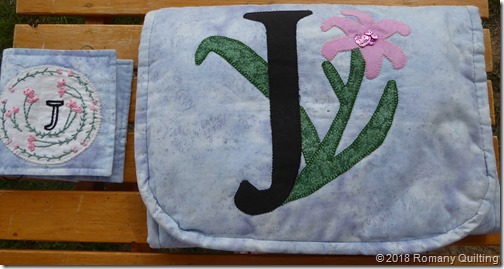 The following day we woke to sunshine and counted our blessings.  The lake of water had drained  away, none of the large trees on site came crashing down around us,  and the the strong winds hadn’t toppled any vans.  We had certainly escaped the worst of the weather.  But the news was grim – Ex Cyclone Gita had caused chaos across central New Zealand – roads closed, flights grounded and a state of emergency has been declared in Christchurch, Buller, Westland, Selwyn, Tasman, Taranaki, and Grey District.

We very fortunate to have  made the return journey from Golden Bay over the Takaka Hill in Monday, as it is now impassable, the road badly damaged and closed with 16 slips.  Helicopter footage showed the Takaka Hill road cluttered with mud, debris and fallen trees.  The damage will take several days to clear. Food supplies for Golden Bay's 5000 locals and 1000 stranded tourists will be delivered by sea tomorrow. 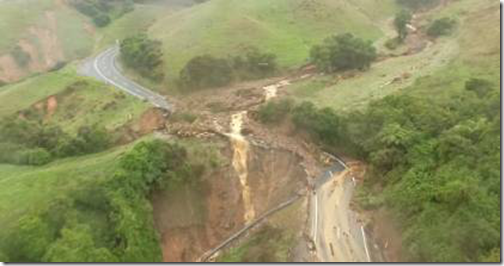 One of the many slips on the Takaka Hill

On a lighter note – let me tell you a family story.  This town has a historical connection to the maternal side of my family.  A young man on the Green side of the family jumped ship at Motueka and supposedly hid under the voluminous skirts of the publican’s wife while the search was on for the absconder.  Once the ship had set sail he was free to start a new life in the colonies and did quite well for himself in business, married and had quite a large number of children.  There is even a local street named after him.   And how about this blast from the past - this is a photo from our previous visit here six years ago when we tracked down my “family street sign”.  Do I look six years younger? 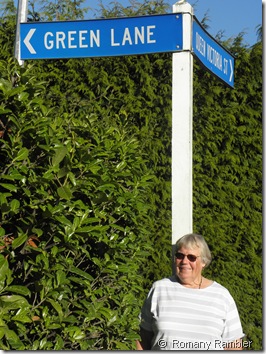 My “family” street sign, named for an early relative

I can’t imagine it would have been hard to settle to stitching during the storm. The road sure is a mess. What a fun family story.

I always hate storms when we are camping and yes the motorhome shakes and the rain sounds so much louder without a big house roof over head. We have been having one storm after another here, and in the last 4 days have had a total of 6 inches of rain now and more to come through Saturday.

Relieved to hear you and Robin are safe. I can't imagine hunkering down in a caravan during a violent storm. It must have been frightening.

What an interesting bit of family history. Sounds like he was a clever man.

Gosh now that would have been scary! We have spent the odd very wet time in a horse truck over the years (and ours was not flash!) but never a storm. Glad you got over the Takaka Hill before it all set off - and pleased to hear you suffered no damage.

Don't know why, but I was thinking about you overnight and wondering how the two of you were faring during the bad weather.

How fortuitous that you had relocated before the worst of the weather hit, otherwise you may have had to stay in the Takaka area much longer than anticipated.

Glad the caravan did not suffer and damage and you are free to continue to travel or just sit and stitch, which ever the preference.

THank you all for your kind thoughts and comments, much appreciated. The weather is calm, we are safe, and ready to move on, our end of our holiday is getting closer.

Oh how scary Jenny....it is frightening in the van.....still remember our hail storm in Broken Hill...yikes! So glad you were safe and it wasn't to trying! Giggling about your ancestors humble beginning in your homeland xx

Jenny, so glad you and Robin are safe, and dry. We set off again on Wednesday, horrendous hail storm, thunder and lightning through Lewis Pass, and traffic galore. Stayed a night at Hamner Springs, could not go any further, found the last bed in a cold cabin!!! Breakfast along the way today, then found all beds full everywhere! We are staying at Oamaru tonight, with a wonderful lady I met in the butcher's shop, when arranging to collect the bacon and ham for the farm!!! Should be OK tomorrow. Thank goodness you came out from Takaka early!!!

That looks like a lot of damage in the ares you mentioned.
So pleased you are safe. How smart were you to move out of that area in time.
Stay safe.