It’s hard to believe we have been traveling around the South Island for 2 months, with only a couple more weeks to go.  And so far we have towed our caravan close to 3000km.  So where have we been to lately?  We were interested to see how the town of Kaikoura was getting on.  Last year Kaikoura suffered a huge earthquake which did immense damage to the road and rail link, leaving this town cut off from some time.  The coastline was raised dramatically, and our stay here gave us the chance to see some of the changes.  South Bay now has a raised coastline, with rocks now lifted up, which were previously covered by sea water. 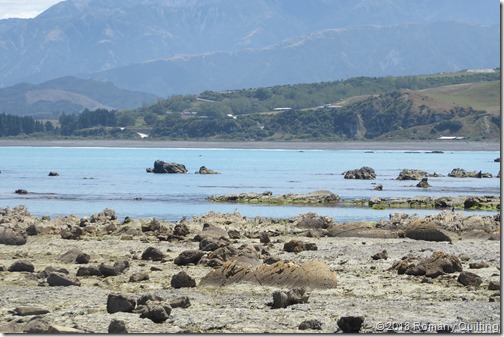 While at Kaikoura we called in to visit Fyffe House, an historic property administered by Heritage New Zealand.  This historic house is built on the “bones of whales” and is all that remains of Waiopuka Whaling Station.  It really is built on top of whale bones, and we were shown where vertebrae bones were laid as a foundation to support the house.  There were tiny bedrooms on the top floor and I rather hoped that I would find an old quilt or two gracing the beds.  But no, in the later years the house was owned by a crusty old bachelor, whose housekeeping  habits were rather questionable, we were told.  But he did donate the historic old house to Heritage New Zealand, so the history can be kept alive for all to enjoy. 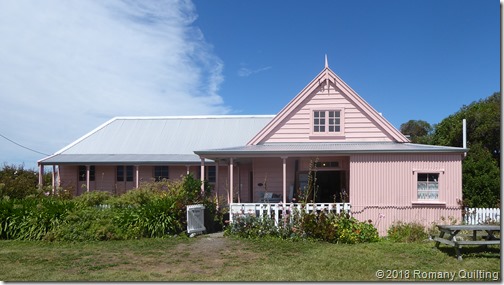 Then we moved on to ticked another item ticked off the Bucket List – the Pelorus Mail Boat Cruise.  And what a day we had. The Marlborough Sounds is a system of drowned river valleys, which were formed after the last ice age around 10,000 years ago.   Our trip took us in and out of these tranquil waterways, surrounded by endless tree covered hills, with the boat dropping off mail along the way.  Delivering the mail meant chugging slowly into the bays, nudging up to the jetty, leaning precariously out, and swapping mail bags with the customer. 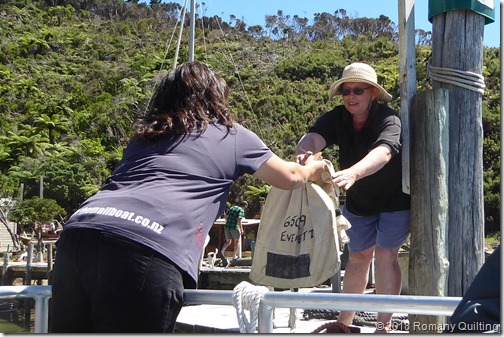 Sometimes the customers brought their pets along to meet the mail boat, so we got to meet them too.  This is Paul the pig, who was practically climbing into the skipper’s window, drooling and grunting,  while he was fed biscuits.   Then at another stop, we admired two rather cute Kune Kune pigs who came to meet everyone on the boat. 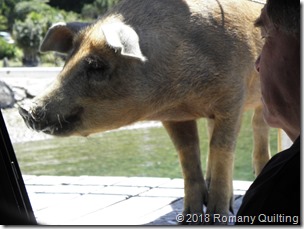 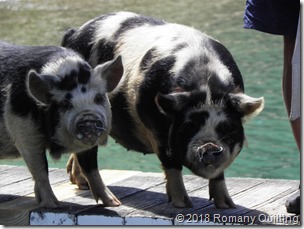 The scenery was gorgeous, there are no roads so it is boat access only. 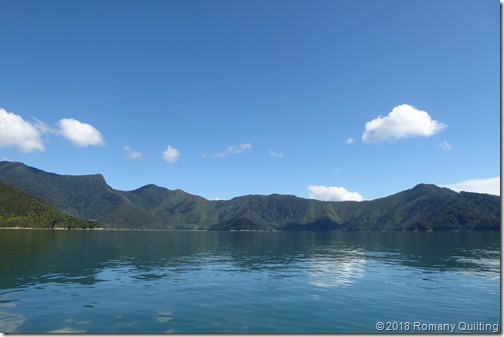 We cruised past a tiny island, home of the King Shags with their pink feet, and these birds are only found in the Marlborough Sounds.  King shags are deep divers, feeding on bottom-dwelling fish species, and have been recorded foraging in water depths down to 50 m. 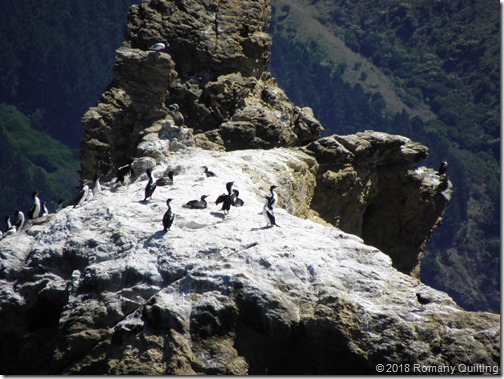 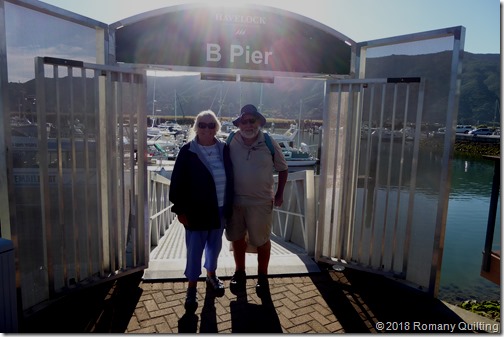 We had a great day out cruising

Moving on to Nelson, and after a warm and cloudy day, the weather has changed dramatically.  But we mustn't grumble – as everyone says,  the farmers need the rain after all those weeks of over the top temperatures.  Robin’s sister Kaye and her hubby Jan live close to where we were camping, and invited us around for a Sunday roast dinner.  It was great to catch up with them, and in my book, nothing beats a leg of roast lamb, although roast pork would be a close second.  It was a wonderful meal, and we appreciated their kindness. 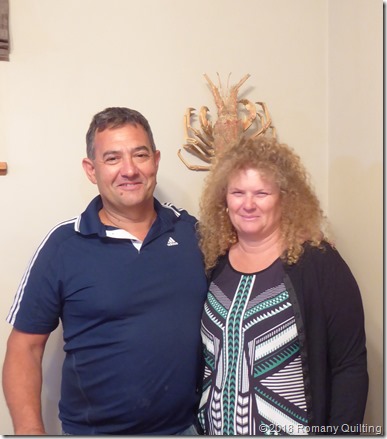 Currently we are staying at Nelson, and today took a trip out to Mapua Wharf.  Once a busy coastal freight wharf during the orchard heyday, Mapua Wharf is now a trendy restaurant, bar, café and arts and crafts precinct.   But the remnants of it’s early history still remain in the buildings. The apples may be long gone, but the old buildings remain, chock full of trendy stores. 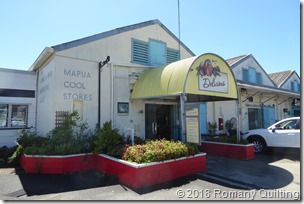 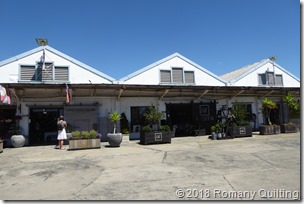 We had the very best lunch available at Mapua Wharf (in our view) and ordered fish and chips from The Smokehouse, seated outside in the sunshine – a “must do” Mapua experience.  This was followed by an ice-cream for him and a coffee for her. 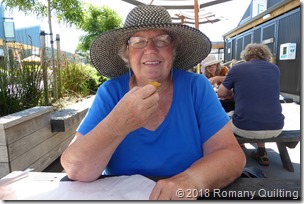 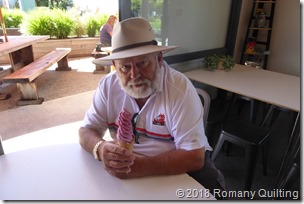 And what’s this I found?  Another quilt shop – that wasn’t there on our previous visit six years ago.  Cushla’s Village Fabrics is well known in Auckland, and I didn’t know that they now have a shop on Mapua, Nelson.  They have been here about four years, I was told. 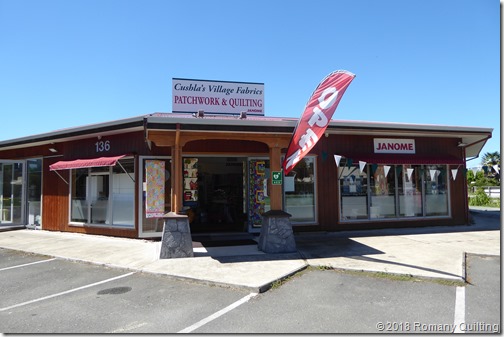 Robin waited patiently outside while I had a look around.  Inside was lovely, full of colour, fabrics, quilts, I could have spent ages there, just pottering about.  It made me realise that I’m getting withdrawal symptoms from my sewing machine! 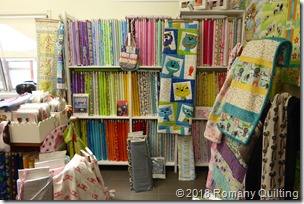 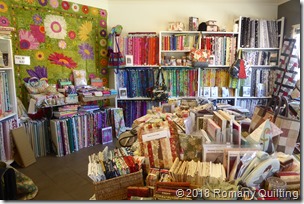 Inside Cushla’s Patchwork and Quilting
Posted by Jenny at 5:34 PM

I have visited the auckland store. Love Cushlas.

Hi Jenny,
Have just been catching up with your wonderful travels in your posts..
Sew nice to visit your son and Robin's sister and BIL.
Lots of fabulous interesting places you've been too and what a lovely bonus to see fantastic Quilt Shops...

thanks for sharing the photos it is so nice to see views of another country. I like finding quilting shops as we travel also, sometimes I stop and look and other times I avoid as I have enough and really don't need more LOL. Nice you are able to visit family now and then along your way also. A house built on whale bones sounds interesting!

I can only imagine the residents' excitement of meeting the mail boat, and how fun they bring their unusual pets with them.

Mapua, one place to add to my list, I have been to the Devonport shop years ago. The mail boat, Hugh went on one from French Pass to Durville Island. So many families in the Sounds live in isolation, school all by correspondence, transport by water, that would have been a fun ride.

Loved seeing your tripping! I agree roast lamb...yum! Neat to happen upon a quilt shop too xx

I have been to Cushlas at Mapua. Lovely place. Hope you remembered Rae who used to live in the Sounds & used to wait for the mail boat! Enjoy the rest of your journey.

I have been to Cushlas at Mapua. Lovely place. Hope you remembered Rae who used to live in the Sounds & used to wait for the mail boat! Enjoy the rest of your journey.

Your wreath block is so pretty Jenny. You have a knack for finding quilt shops and what a great chance to visit with family. The mail boat was a standard thing in outport Newfoundland for many decades and it did just what you describe. Often most of the community would go to the wharf when it arrived. That is a most interesting Bird and I must learn more. Continued happy travels!

The idea of having a cruise on the mail boat sounds wonderful. That is a lovely way to see the area from a different perspective.
And fancy finding another quilt shop!!