Quite by accident, we stumbled across another quilt shop on our travels.  “June’s Room” has only been trading for about three years, so was not here when we last visited Nelson six years ago.  I had a look around while Robin sat on the handy seat outside on the verandah. 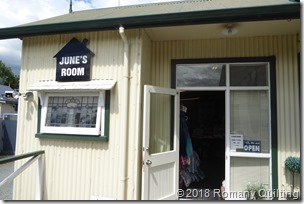 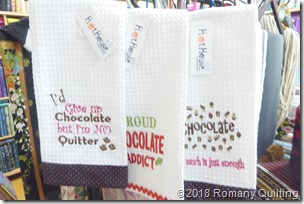 What a delight of colour inside the rather plain shop front.  Beautiful fabrics, knitting yarn,kits and patterns,  and I rather liked the embroidered “chocolate” tea towels with the cute sayings.  There was a gorgeous range of batiks, I’m always rather drawn to them, and lots of black and whites, which are always very popular.  June was a very elegant lady who told me she had taught sewing for many years. 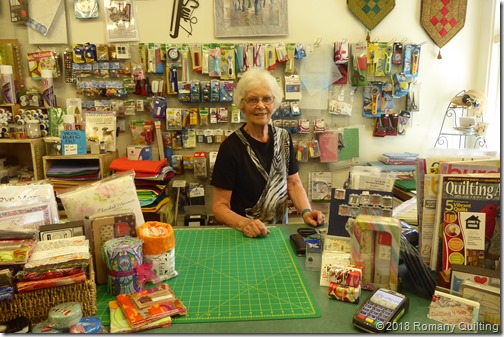 So what else have we been up to on our holiday?  Before the storm arrived we enjoyed a week in Golden Bay, right at the top of the South Island, and traveled as far as the road would take us.  We had never been to Cape Farewell before, and  we trudged up the hill to the lookout point, joining the other tourists all looking over the rail at the  rather impressive sight in front of us.  The sea was surging in endless waves and over the rocks.  We looked down to the seals far below.  Some were sunning them selves on the rocks.  And another group were gently bobbing about in the waves, they didn’t seem to be feeding, just enjoying themselves and having fun. 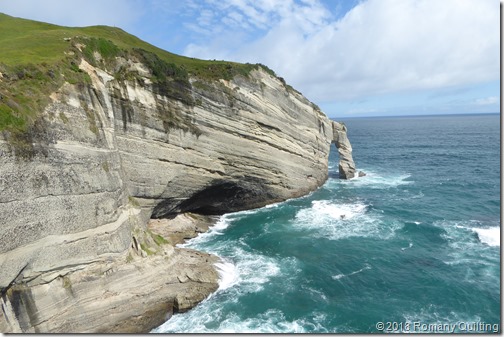 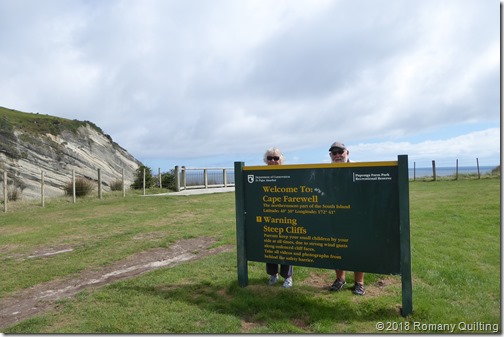 On another unsealed road we traveled up hill and down dale, and over the multitude of causeways, finally arriving at the pretty little Kaihoka Lake.  There was a swimmer in the water, cooling off on another hot day, and kayakers paddling around.  It looked a lovely place to go for a picnic and enjoy playing around in the water. 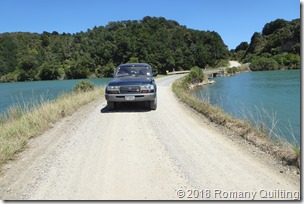 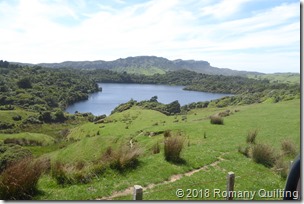 Driving over yet another causeway, and Kaihoka Lake

Back in Nelson again, which is known as the “Sunshine Capital of New Zealand” because of all the hours of sunshine it enjoys.  Just up the road is the remains of a huge Tasmanian Blue Gum tree, known as the Otterson Gum.  Following a branch falling down, it was discovered that there were major structural problems and this notable tree was felled in 2005 at the age of 158 years.  It’s hard to imagine just how tall this mighty tree must have been before it was cut down, the stump itself is huge. 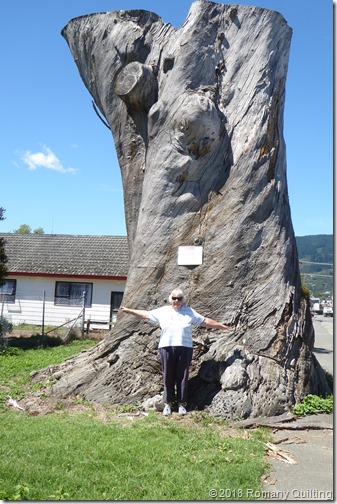 At the stump of the Tasmanian Blue Gum

With only a week of our holiday to go now, we are slowly making our way back to Picton to cross over on the ferry.  Returning to Nelson gives us the chance to catch up with Robin’s sister Kaye once again before we move on.
Posted by Jenny at 9:55 AM

it is always fun to find quilt shops along the way - for me especially because I have none close to home and I can always find the odd notion that I need when traveling that I forgot to pack or a couple fat quarters.
Such a large tree stump yes one does wonder how large that tree was when they took most of it down.

You have managed to find almost every quilting fabric shop on the way.!!! I did see one, 2 days, ago, but too much traffic behind us. We are at the farm, so quiet, and it is " all go" for next Saturday. on our way back north later on,I know there will be more time to stop and look. Hope you have fine weather.

My goodness, that tree stump is enormous! I love to watch the ocean (despite living in a landlocked area) and Cape Farewell's cliff and coastline view is gorgeous.

It's nice to find little, personal quilt shops when you don't expect it.

The scenery is beautiful. And the tree stump is enormous!
Looks like you have discovered another very sweet quilt shop.