The dice has been rolled this week and it has brought up number 2 – which is horse quilt number 2 for want of a better name.  You may remember that last year I completed a large horse quilt for equine lover and horse owner Emma, my elder grand-daughter.  So now it’s the turn of her equally horse besotted younger sister Megan to have her own horse quilt – eventually.  As any quilter knows, these things take time!

I had stitched so many black and grey nine patch blocks for Emma’s quilt last year that I still have a large assortment left over.  And that’s after making both girls a large squishy bed cushion for Christmas last year.  It would be sensible to use these blocks in Megan’s quilt, I feel. 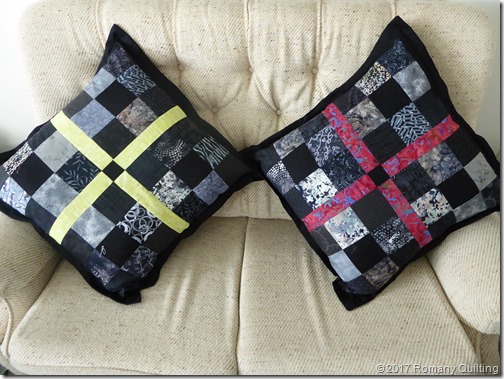 Two cushions stitched up with extra 9 patch blocks for Christmas

So I guess the first thing to do is count all the nine patch blocks I have tucked away and just see how many I have, and lay them out so I can get a good look at them.  I’m be making a similar quilt for Megan but with different horsey accents – that’s the plan, anyway 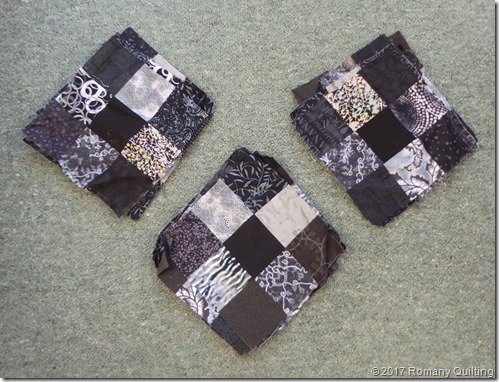 How many blocks are there?

And I still have quite a selection of black and grey prints to make more blocks, if required.

I had originally planned to make something really clever for the centre of the quilt, but that has been more difficult than expected and hasn’t happened yet.  But I’ll persevere a bit longer, although I may have to go with Plan B instead.  Let’s just wait and see what happens.

What a bonus to have some blocks all ready to start with.

Yes, that centre did look rather challenging. I'm sure whichever way you go, it will look lovely.

She will love what ever you make up for her, great bonus having all those blocks all ready to go though. Looking forward to seeing what you end up with. Cheers Glenda

Love the cushions and the impressive stacks of blocks for the second quilt. You will find the perfect way to use them.

I have a few pillow forms I've picked up at garage sales. I could use to actually make some pillow covers for them.

Your grand daughter will be delighted! I agree, how good to already have a start made in the form of the 9-patches!

How wonderful to have a pile of 9 patches ready for the start of Emma's quilt.
Look forward to seeing it progress.