A new UFO this week

The “roll of the dice” has been done this week – and it landed on number 4.  Which is a new project on my List of 6, “Soul Searching, designed by Kathy Doughty.  I’m doing my blocks with a little more contrast than shown in the book. 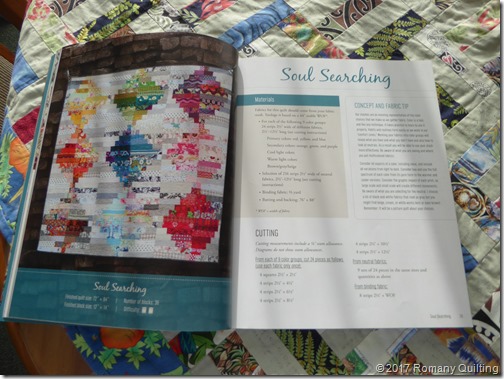 The design is similar to a Log Cabin, and this has truly been a “leader and ender” project.  The strips had been cut and pinned, and fed under the needle as I was sewing other things, just one small seam on each strip.  And it’s amazing how quickly these little strips mount up.  This project hasn’t been touched for quite some time so I’m rather pleased it has made it’s way onto my list.  This is what I rediscovered when I unwrapped my bundle, it was all rolled up and tied with a selvedge strip to keep it tidy. 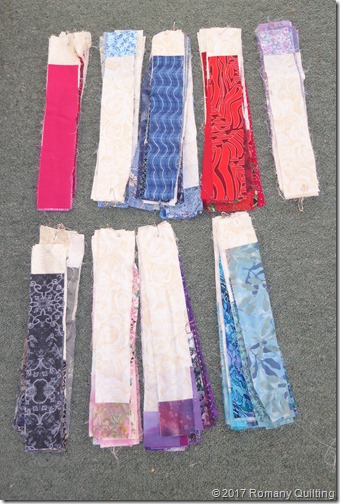 Strip sets, waiting to be assembled

There’s already three blocks assembled, so I’d made a good start before it all got rolled up and put away. 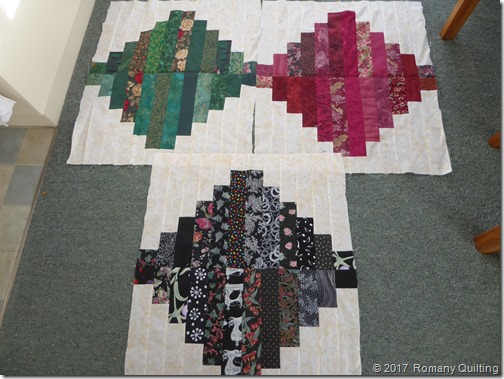 As I’ve decided to make twelve blocks, instead of the nine in the book, I’ve still got quite a lot of stitching to do.  Today I started off working on a lilac set – with all straight seams, how hard can it be?  Harder than I thought, as I got my trusty unpicker out to rip out a couple of seams.  I had picked up two strips, pinned them together, but got them upended so they were pinned and stitched on the wrong side, – if you know what I mean.  More haste – less speed, double check what I'm doing, and I was soon on the right track.

We are out and about all day tomorrow, but I should be able to squeeze a few hours sewing time on Friday.  Wish me luck.
Posted by Jenny at 3:36 PM

Wow Jenny another lovely project. And a good start already in progress. Wonderful for making use of scraps.

Lovely and bright, just what we all need after last night's gale winds. What a super pattern.

I love that quilt... have seen it on another blog..
Your blocks sew far look great.
Oh no , I know what you mean about less haste. I'm often reverse sewing.
Enjoy your day out.

I love this project - a true scrap buster! Are the strips cut at 1.5 inches?

I love this quilt. It will be a great way to use up lots of scraps. Have fun pulling all the different colours from your stash.

This is going to look so gorgeous. I love new projects. Hope you get to roll the dice on this one real soon to make more progress.

Oh, okay, that's the one for your bed. I like the more contrast version you are doing.