A Weekend at Home

As much as I enjoy travelling far and wide towing our caravan behind us, it does cut into my sewing time.  So it’s nice to have a weekend at home, like this weekend.  This means I had extra time to continue with my UFO of the week, number 1, my Animal ABC quilt.  You may remember that most of the top is assembled, but I had a problem with the letter Z.  So I got busy with my unpicker, and carefully removed the machine button hole stitches holding things in place. 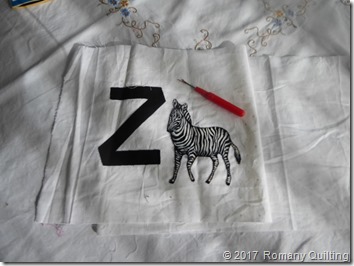 I had seen an idea that I wanted to try, so started sewing beige, cream and pale yellow strips together.  Mindless sewing really, for this part of the block. 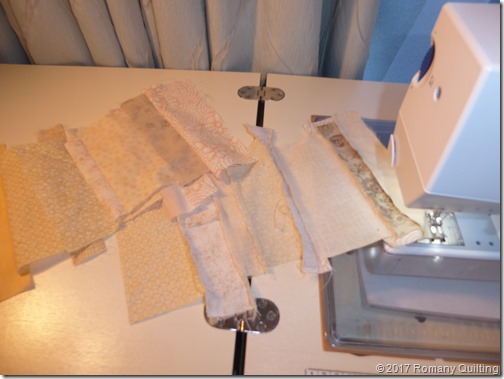 These strips formed the base of the African savannah, and then I added blue sky and hills away in the distance.  Next I stitched my letter Z back in place.  Then it looked like this.

Letter Z has progressed to this

Add a herd of zebra plus a young cheetah spying on them behind a bush, and this is the result.

This last row was attached to the rest of the blocks, and then the borders attached.  And the top is now done – I’m rather pleased with it too. I have to admit that the Z panel was not my original idea – I had seen a picture of something similar in an older magazine and thought it looked great.  The original design had a strip pieced sunset sky, but I decided to go with the blue and white cloudy fabric I had tucked away.  The backing will be pieced from some of my left over animal prints, I’ve decided, then I’ll have to consider how I’m going to quilt it.
Posted by Jenny at 5:07 PM

Love your Z!!!!!!!!! It looks lovely and absolutely perfect for your quilt

Z for zippity do dah ! Great solution, love it!

This is so amazing!

Stunning idea for the last row.I like it all so much.

I was totally baffled by how you might add a single letter to the quilt..this solution never crossed my mind.
Brilliant execution also.
Joanne in Massachusetts

Thank you all for your kind comments - much appreciated.

Clever idea with the Z block. It looks great with rest of your quilt.

Wow! It really has turned out well. I think your rehashed "Z" block finishes if off beautifully. A great idea.

That may not be your original idea, but it sure looks awesome! What an excellent way to incorporate a new row.

Best animal ABC quilt ever!!! Love your adaptation of the letter Z!!!