After weeks and weeks away from my sewing machine (blame it on summer holidays away in the caravan) it was time to get serious again with my List of Six UFOs.  Don’t be fooled – I’ve got so many more than six.  But six is all I can cope with at once.  I looked long and hard at my list before I rolled my little pink dice.  There are a couple on the list that I really, really would like to work on this week.  But rules are rules, and I decided when I started that I wouldn’t manipulate the results.  So number five it is, which is my Christmas Stars and Nine Patches. 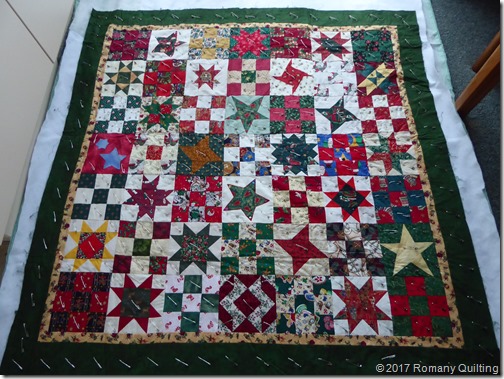 All pinned up and ready for quilting

I last worked on this project in early December when I finished assembling the blocks and adding the borders.  Then in the pre-Christmas rush I got it layered and pinned all ready to start machine quilting - then put it away. 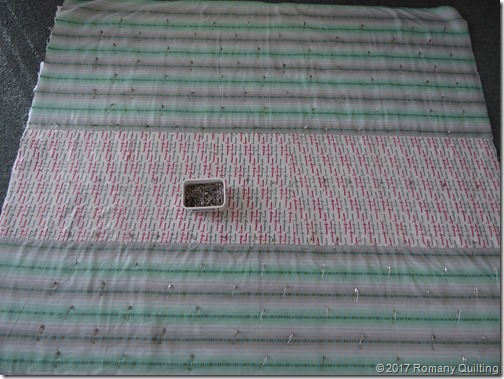 I’m starting with stitch in the ditch straight line quilting around the blocks to hold it all together. Then later I will do something or other in the star and nine patch blocks. Quilting is always a slow job for me as I like to pin, pin, and pin some more along the quilting line I’m working on.  Slow and steady I may be, but I’ll get there in the end – eventually! 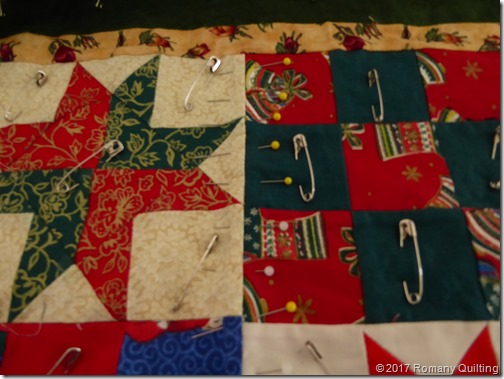 Do you use a teaspoon under to lift the quilt and make it easier to put the pin in? A friend of mine uses a very old very bent teaspoon. Lovely blocks there.

Remember, slow and steady wins the race.....and ends up with lovely quilting, rather than a rushed mess.

This quilt is a beauty, Jenny, enjoy quilting it.

I had a hard time choosing 17 UFO's from my list for the 17 UFO's in 2017 Challenge!
Sadly, I also have lots of things on my list that I want to get started on too!

I love your idea of using dice to decide what to work on next. In fact, I borrowed it to decide the random order of stripes in a scarf I'm knitting from odds and ends of wool - roll one for a blue stripe, two for a pink, five for purple and so on.

Pining is my greatest downfall. I pin all over and start quilting in the middle, but always end up puckering or stuffing up somehow. Where do you start pining on your quilts?