Two weeks in a Row

The roll of the dice which determines which of my 6 listed UFOs I’m working for this week, came up trumps again for UFO number 1 – the same as last week.  OK then, I’ve only just put this project away, and was really looking forward to one of the others which is a lot closer to completion.  That way, I just might have a finish sometime soon.  But rules are rules, so out came the caravan quilt again.

As I’m planning a checkerboard border too, I felt I really needed another strip to separate them both.  But before I rushed off to the quilt shop to buy something suitable, I had a look through my baskets.  There – how about this green batik I used in my daughter’s quilt, that should do nicely.  So I sliced strips, measured, and stitched along all four sides. 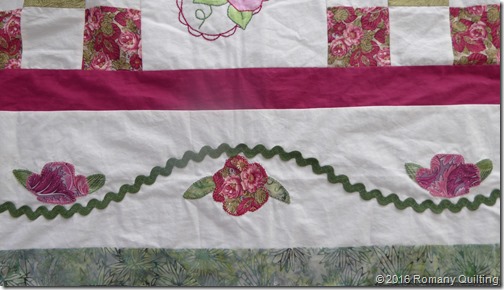 Next was to make some more of those two patches for the checkerboard border, and start joining them together to fit down each side.  I’ve stitched a few,  – but  perhaps I’ll need more.

I haven’t done a great deal of sewing so far this week, but we had a very important appointment to keep this morning.  My daughter Nicky and her hubby Robert are off to England for their big OE for a couple of months, so we went to farewell them from Palmerston Airport.  First flight to Auckland, then on to Dubai for a two night stop over, and they finally land in Heathrow.  It will be a marvelous adventure for them both, and we wish them safe travels and a wonderful holiday! 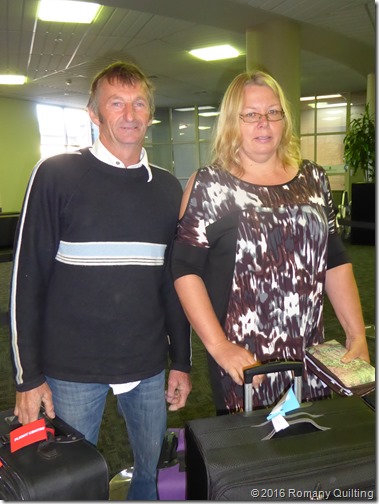 Robert and Nicky, off on a big adventure
Posted by Jenny at 7:46 PM

Jenny, I'm glad you're working on this project again since I'm quite looking forward to seeing it once it's all done ... it's a beauty.

Your green batik is subtle and goes so well with the other fabrics. OE, something that wasn't there in my younger days, what an adventure for them both.

Where in England are they going to be? Very exciting! Anytime one travels, one grows as a person; I firmly believe that. Your caravan quilt reminds me of my 'fleurs' quilt, which needs quilting...

Thank you ladies. I better start sewing for a wee while or the day will run away with me.

As for the OE - lucky them. Travel certainly is exciting. They are starting off with a two night stop over in Dubai, then on reaching England, meeting up with friends and will spend several days onboard a narrow boat. Then they will no doubt go where ever the fancy takes them. But knowing my daughter, I'm sure she has their trip well mapped out.

Love the colours of your caravan quilt! What is OE? That is a marvellous trip for Daughter and Hubby.

What's an OE? How nice to be going so far on a trip! And a little time in Dubai. I have heard wonderful things about it. A friend went there a few years back and taught a quilt class. Hmmm, more than ten. How time flies! I like the green bit, seems a great divider. Those dice must be weighted. LOL Maybe you need new ones?

Looks like our New Zealand slang has got some of you confused! An "OE" is "Overseas Experience" and young people generally head off to Britain for a working holiday. In my daughter's case, the same as when Robin and I headed over there, the OE just means a long extended holiday. With New Zealand being so far away from Europe, it is a big adventure to travel half way around the world just to get there. And as we Kiwis have to travel so far, it makes sense to have a holiday lasting months rather than just a week or so.