It was with a certain amount of trepidation that I rattled the dice in a coffee mug this morning, before rolling it on the floor to see which UFO project I would be working on this week.  After all, number 5 had appeared three weeks in a row, and I was starting to wonder if it would be 5 for ever more!  But no, a new week brought along a new change in number, and this week the project of choice is number 3.  Which just happens to be my Maple Leaf wall hanging. 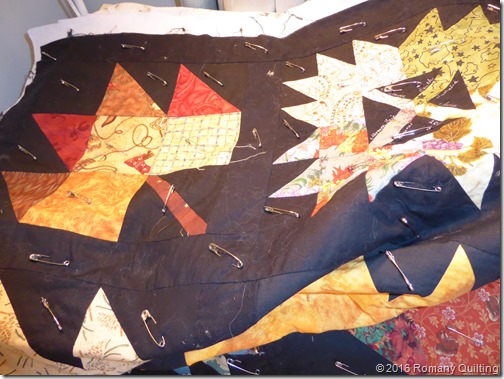 All pinned up and ready to quilt

I received these blocks way back in (gulp) 2000 when I took part in an international block swap using the maple leaf pattern.  The idea was to stitch it in fabrics which relate to our particular country.  Mine was done some time later when I finally got around to assembling the blocks, and I used a batik fabric featuring New Zealand birds.  There are keas, fantails and kereru on the fabric. 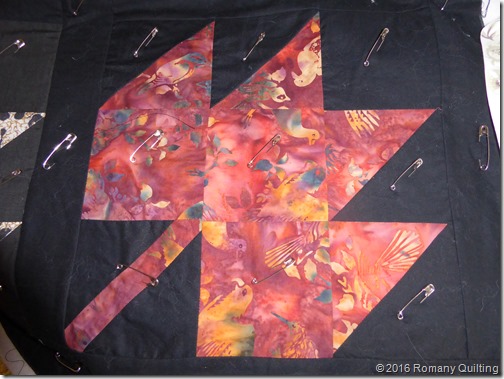 Other blocks were received from Canada, Australia, Indonesia and USA.  When my sewing machine was away getting serviced I put the layers together and pinned it up ready for quilting.  About this time I decided I really must do something about my many UFOs and this quilt made the UFO list as number 3.

Today I have started stitching in the ditch (using my walking foot) around the sashing strips to stabilize the quilt.  I’m a great pinner, pin down each long seam, and stitch away.  Does pinning in place make much difference, I sometimes wonder.  It’s certainly slower, but I feel it helps me, so I’ll continue to pin, pin, pin away. 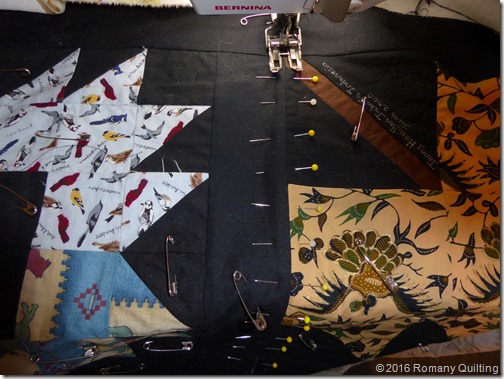 Stitching in the ditch
Posted by Jenny at 4:35 PM

I just love the idea of the fabric including native birds (which I had to look up). That's a fabulous idea and your maple leaves are large and manageable. The only time I tried them was with an intricate small block with many pieces. It was too much for me at the time. Perhaps I could do it now. And I don't pin nearly as much, Jenny. Which makes me think I should be pinning more. Meanwhile, I'm glad you rolled a 3 and we got to see this one. LOL

Hello Jenny,
Just calling in from the UK to say Hi and admire your maple leaves. I love the batik print and the colours. I am a great pinner too and I use temporary spray glue and safety pins just to be sure.... It's a belt and braces method which works for me! I'm thinking of trying those clips for the binding as soon as I get to a quilt show to buy some,
Have a lovely week quilting,
Kind regards,
Sue

Thank you ladies for your nice comments. My maple leaf blocks are a nice size, 12 inches and a great easy pattern. As for those binding clips, they have been on my wish list for a while, I just need to get organised and buy some to try.

What a fun quilt! How happy you must be to look at something different for a while. You'll probably get a lot of it done. I like the idea of rolling the dice, but I'd have to get my projects out and number them, and seeing them all at once would be scary! =)

It's rather timely finishing off this quilt now. It hasn't dated a bit.