After missing the previous get-together with the ladies, Sew Wot Tuesday rolled around again  today, so it was good to see everyone again.  Pam was our hostess for the morning, and we were pleased to see her looking better after her recent stay in hospital.  Some of the ladies came bearing plates of goodies for morning tea, as we wanted Pam to rest and take things easy while she was recuperating.  And once again, we had a birthday to celebrate.  This time it was Moira, who was swamped with cards, lots of interesting parcels to open, and plenty of good wishes.   She received fabric, and more fabric, fancy choccies, some pretty serviettes, and a beautiful wardrobe hanger with an attached “smellie” inside to make the the clothes smell nice. 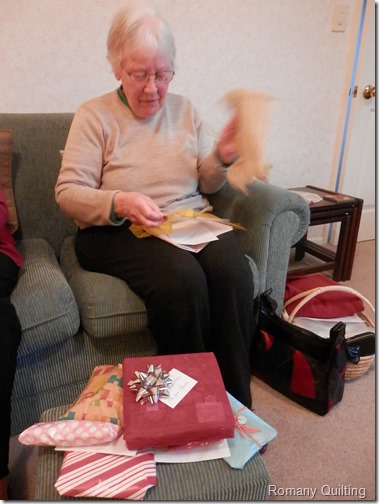 As always, there was some beautiful Show and Tell to admire.  Carol had been busy making a quilt each for her twin sisters birthdays.  One sister loves all things vintage and her gift was a lovely wall hanging made with 1930s fabrics and pretty stitchery blocks done with variegated thread. 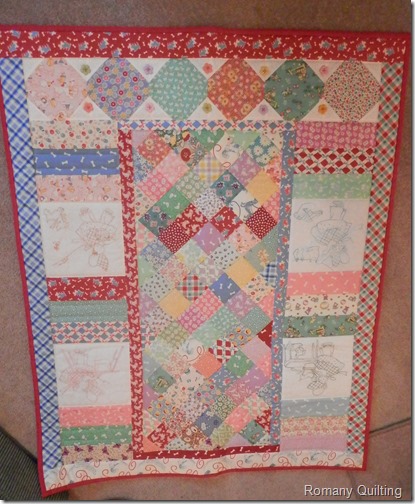 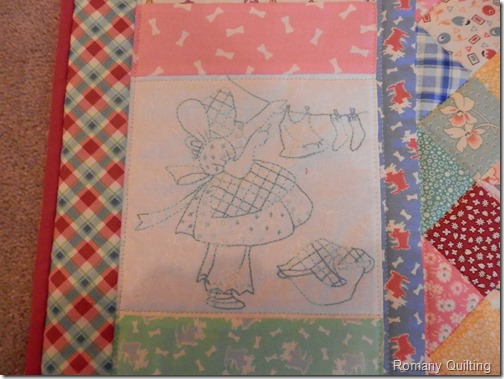 Both twins have different tastes, so a pretty scrappy fence rail quilt made in lavender, green and a touch of mustard was Carol’s gift to her other twin sister. I’m sure they appreciate having a big sister who quilts! Mary was working on the borders of her beautiful Chocolate Roses quilt, button-hole stitching the roses in place.  This is so lovely – it looks good enough to eat! 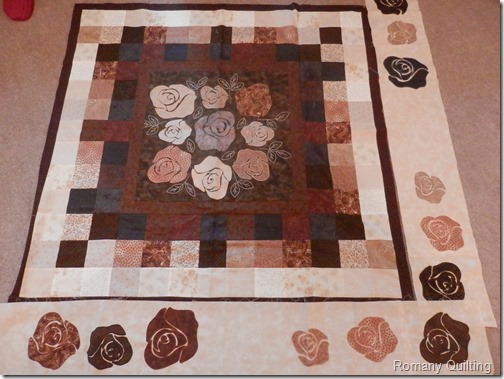 I showed the group my Give Thanks cushion with the stitchery front, (see previous blog post).  This one is version 2 which I made for myself, after making one and posting it overseas last Christmas.  I thought it was such a nice pattern I wanted one just for me.   I have since started a new stitchery project, ABC Christmas.  More on that later when I have something interesting to show.

There was a bit of knitting going on, and both Rae and Carol had knitting needles clacking.  And Heather B had to leave early as she was going to check out a new sewing machine – how exciting.  She had worn her previous one to death, she was told.  It was a lovely morning, as always, thanks ladies.
Posted by Jenny at 4:34 PM