Last weekend when we were away at a caravan rally, there was a table of extremely old craft magazines, that someone had obviously been clearing out from their home. “If nobody wants them, they are all going to the tip”, was the announcement. The majority were old cross stitch mags, so not really of much interest to me – my one and only cross stitch attempt was troubled, to say the least! But hidden away, I came across a few old quilting magazines, which I pounced on, and took back to the caravan to flick through at my leisure. The front covers were missing, and they were dated from 1992-1994. Included in my lucky dip were McCall's Quilting, Quilt World, and Quick and Easy Quilting. I had forgotten that the early magazines were not printed on glossy paper as they are now, and often had black and white pages interspersed with colour pages. 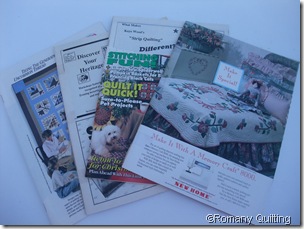 A treasure trove of old magazines

My taste in quilt magazines has changed over the years. When I started quilting umpteen years ago, I first magazine I subscribed to was the Quilters Newsletter Magazine. This was founded by Bonnie Leman in 1969, and she composed the first issue on a manual typewriter at her dining room table. Many contemporary quilt historians agree that Mrs. Leman almost single-handedly launched this revival by researching and publishing information about a domestic pastime that had fallen out of vogue since the end of the Great Depression and the onset of World War II. Mrs. Leman was inducted into the Quilters Hall of Fame in 1982. Sadly Bonnie Leman passed away in September 2010. I also subscribed to Traditional Quiltworks and looked forward to these two American quilting magazines regularly popping into my letter box.

Several years later I switched continents and started purchasing the Australian Patchwork and Quilting magazine, then after I discovered the joy of stitcheries, started to buy the Australian Patchwork and Stitching from time to time. These seemed to breed at an alarming rate and threatened to take over the house, so I stopped my subscriptions. Nowadays,the only magazine I do subscribe to is our very own home grown New Zealand Quilter. I am a proud foundation subscriber, have every single issue and have seen this magazine grow from strength to strength.

I wonder what magazines other quilters like to buy, and if, like me, your tastes have changed over the years? Do tell.

I am a true magazine junkie and yes they are threatening to take over our house and studio as my husband also has the same passion and we buy and subscribe to a wide variety of titles. It is thanks to magazines that I first embarked on embroidery, applique and then quilting and the reason why we opened a shop 14 years ago. As my tastes change over the years so too do the magazines. Happy stitching!

What an interesting topic! My first was "Quilters Newsletter Magazine" too. Then I branched out to add "American Patchwork and Quilting," "Love of Quilting" (Fons & Porter), and "American Quilter." Since I am a freelance writer for quilting magazines, I try to keep up on the latest, though I don't subscribe to them all. I once did, for business reasons, but in the last year have completely purged except for QNM which I have since 1994. I donated all my magazines to brand new quilters who have taken my beginner quiltmaking lessons. I'd like to believe they're getting a lot of mileage from them.

I have subscribed to Quilters Newsletter for years now and love it. I have several years worth Aust. P&Qs too, but stopped it as I have so many. NZ Quilter is great and I have most of them too!