My son moved house a while ago and was busy packing up his stuff. The telephone conversation with him went something like this. “What are you going to do with that quilt I made you”, I asked, knowing that he didn’t use it. “I don’t really need it, Mum”, he said. “Well, send it back to me then”. I had visions of it being chucked out with the rubbish. So he packed it up in a carton, adding the wall hanging I had made him earlier , and they arrived like this. 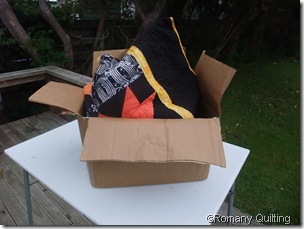 The quilt was made especially for his 40th birthday. His working life revolves around writing about hi-fi equipment and music and I found a lovely musical print to use for the alternate blocks, plus another for the backing. I stitched stars using graduated fabrics in shades of yellow and orange, set against a black background. Using the cut off corners from the stars, I stitched them into flying geese blocks and used them in the borders. Took it along to my favourite commercial quilter, who suggested using motifs of musical notes. It all turned out rather striking, I thought. 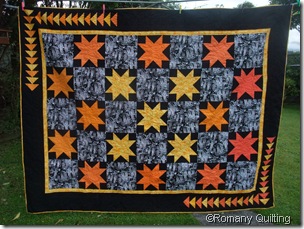 So…….. what do I do now? Keep the quilt and hope he wants it back some time in the future? Don’t think this will happen as he had not used the quilt in five years. Use it ourselves? Or give it to another family member? Apart from being bundled up in a cupboard all this time, it is “as new”, and as bright and vibrant as when I first started stitching it. 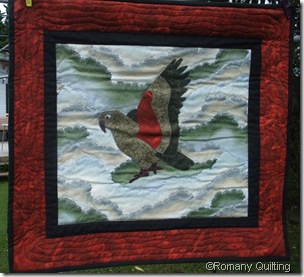 Also included in the carton was a wall-hanging appliquéd with a New Zealand Kea. My son was an avid bird-watcher in his younger days and I made this for his 37th birthday. If I am completely honest I would have to admit that I am more than a little hurt that my son doesn’t want his quilt. But then……. he didn’t actually ask for one. What he did say was, “If you have to make me one, make it in black, yellow and orange”. So I shouldn’t have presumed that he really wanted a quilt now, should I? Sad, but true, I guess.

Jenny I feel deeply for you. But I believe, we make them with love, we give them with love then what happens to them is not our business. Lucky it came back to you... do something nice with it. Its a lovely quilt.
I have learnt, mainly through The Scot, that not everyone looks upon and values a Quilt like I do. Use it and enjoy it.

I made a quilt for my dd for her 21st birthday, 4 years ago. She lives interstate & I finally made it down for a visit. The quilt wasn't on the bed so when she was out one day I had a snoop in the linen press. It was rolled up in a plastic bag. She recently moved & said she took most of her stuff to the tip. I had to ask,'What about your quilts?' she's made some too. 'Oh I still have them,' yes no doubt wrapped up in a plastic bag, lol. I felt good making her the quilt, it was an achievement to finish a queen size quilt, so what she does with it now is ok. I think she'd be happy for me to make another one but I'd let her choose the fabrics & design so it's exactly what she wants. If I were you I'd use the quilt & enjoy it. He may want it back down the track, who knows, & it will be there waiting.
cheers, Jan

Oh this is so difficult and I am sorry you have been hurt by your son, however unintentionally! The quilt and the wallhanging are lovely, I would use them or give them to somebody who will appreciate them or maybe even raffle or auction them.
We can never know what reaction a quilt is going to provoke but live in hope that recipients will appreciate them for the love the maker put into them if nothing else.

Being a greedy little bugger I would say send it to me PLEASE!! The vibrancy and life just scream out from it. I am sorry that he could only see the quilt and not the love that went into it. As hard as it sounds I would give the quilt to someone who will love it.

I made a quilt for my parents for their 50th anniversary and yes it did arrive 3 years late but I still thought it would mean something to them. They used it for a few years and then gave it back saying that they no longer needed it and it was taking up space.

I was hurt but a while later gave it to a friend who needed a pick me up. The quilt is now loved and treasured. I made no mention of it's history.

It is a great quilt and I sympathise you with Jenny as I have had bad experiences with quilts made as gifts for family members. I would keep the quilt and hope that it may be wanted again at a later date.

This quilt has been looking for a home and so it has come home to you. Use it yourself!

I am so sorry he does not appreciate what you made for him. Try not to take it personally, boys will be boys and I am sure he has no idea that this has hurt you. We are suckers for wanting to share our love of quilting (or any art or craft) but I guess we can be single minded in our expectations that they will be loved as we love them. And yes, sadly and without meaning to hurt your feelings I would say that the comment re "if you must make me one" probably was the writing on the wall. Even so he will one day, after you have gone, weep at his insensitivity. I know because now that I have lost my parents I come across things they did (Dad used to write novels that were never published and my mother use to paint in oil) Dad wanted me to love his books and I was mild to say the least because they were not my style and Mum made an oil portrait of my son which I look at now and know (because I paint now too) just how much work went in to it and I thanked her but without a real clue, and I didn't know what to do with it because I hate portraits of family members on my house walls. Now I weep for the appreciation I didn't show.
But you know what, they have forgiven me just as I would forgive my children because my parents probably had something their parents made etc etc down the line. It is not you he has rejected just what is to him a bit of fabric.
Pam in Canberra

I wonder and just a thought.... will he ever have a family of his own... may be you could keep it safe and perhaphs give it to his children...saying I made this for your Dad along time ago.
I also made a quilt for my brother and sister in law 25th aniversary and it was not received well...it does hang but in a spare unused room I made it as a throw for their lounge making sure it fitted in the room etc....so I am very careful now on who I give my work to.. and never do it as a surprise any more unless I know they would like it or they have asked in some way.

Jenny, I was feeling so guilty about not making a quilt for my brother (in his 50s). It took me most of the year, was queen bed size double- sided memory quilt: most fabrics were reminders of things he had done in his life. His only comment was "Thanks Kath. Chantelle really likes quilts too. Do you think you could do one for her?"
Like you, I was so hurt. BUT, everyone else I showed that beautiful blue B quilt to, while it was being made, absolutely raved about it. And, yes, I am making one for Chantelle (his partner who doesn't live with him).
I don't have an answer for you, but I do understand how you feel.
Kathleen in Ringwood 3134

I´ve read your post and some of the comments. Being a mother myself I´ve learned that kids don´t necessarily enjoy, value and treasure what seems enjoyable, valuable and worth being treasured to us. I imagine a few things change along the way. So, do keep the quilt and panel with a note inside, so everyone knows it belongs to your son. He will be proud to have it as he sees things from another point of view, in the future.Just make him sure of your love, once again expressed in a making a very special quilt for him. He will understand, enjoy , value and treasure this feeling, sooner or later. I´d bet.

So devastating that he never used it after all the love that you put into it just for him. Be grateful that it came back to you to decide what is to become of it. I made both my sons a quilt each for their 21st birthday and both quilts are loved & very well used.

A typical Bloke thing to do Jenny... don't be disheartened. Most blokes just don't recognise the love that goes into quilts. I have never made my DH one as he says "why would we want another quilt lying around?".
Although he did comment to a friend recently he is yet to receive his quilted motor-bike cover???
Keep it and use if you wish, or pass on to a charity.... they will find a loving home for it.

I read this one with tears in my eyes... I had made my oldest son quilts that hung on his walls, first one made of "jams" material [remember those shorts?] coupled with black that hung in his room at home, then the one that he wanted for his apt when in college and the years until he left our city... and then the last one that went with him as his career took him to other cities and then states...

I found all those quilts, lovingly folded, and stored in his walk in closet when we cleaned it out after a drunk driver took him from us...
No, they were no longer hanging in his home but they were still there... as I wished he was.

Now they are stored lovingly, in my closet, on an upper shelf, to be taken down every now and then, to remember John.