The dice rolled number 6 this week, which is my “Yo Yo – just do it”  project.  It’s been a while since I looked in this bag.  With a couple of spare afternoons this week, I decided to “just do it” and hopefully finish with these yo-yos once and for all. 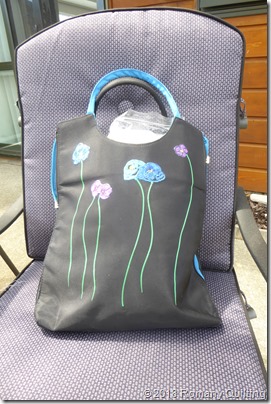 A bag full of yo-yos

I’ve spent several sunny afternoons sitting outside under our shady arch-gola.  Gemma has loved being outside with me – there are bugs to check out in the lawn, nice warm concrete to roll on, but she had better be careful of those bees buzzing around the lavender bush.  I keep her on her harness and lead while she is outside – she is so active she would be up and over the fence in no time at all. 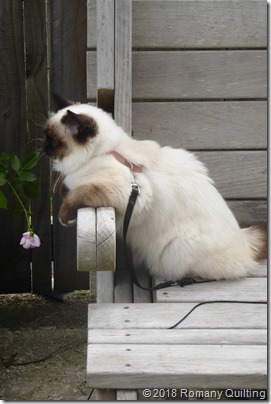 Inside my bag were all these different sized yo-yos I had stitched which were to become a snowman. 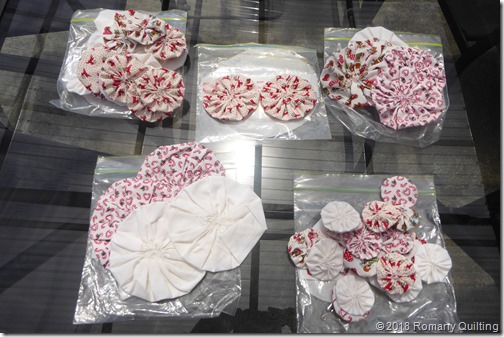 It took me a couple of afternoons to put the snowman together, much longer than I thought.  And here it is, together with the reindeer I finished earlier in the year.  The patterns used were Yuletide Yo-Yos from Indigo Junction. 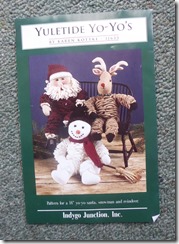 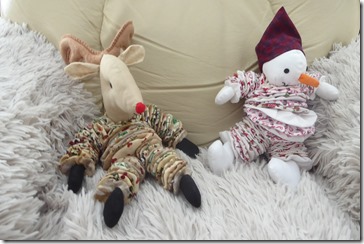 And then there were these brown ones, which were to become a gingerbread man.  I found this pattern in a Christmas magazine. 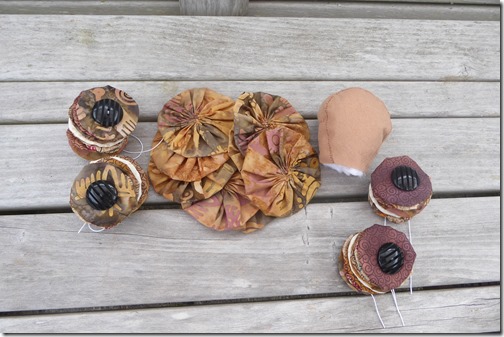 Overall, it took me hours and hours to stitch the hands and feet on, and to thread all the yo-yos together, and I have to say that I didn’t enjoy it one little bit.  And worse than that, I didn’t like what I ended up with.  Sadly, I feel rather like a young Mum who cannot bond with her new baby, and wants nothing to do with it.  That’s how I feel about these three of the yo-yo people I have created – take them away! 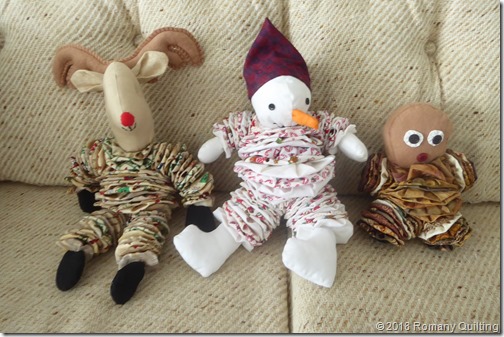 Waiting to be adopted

It’s obvious that yo-yos are just not my thing, and I declare that I will never stitch another one!  I’m glad I persevered through to the bitter end, as these could have ended up in the bin months ago.  The best thing to do, I've decided, is to  donate them to one of the local Op Shops and hopefully someone else will love them more than I do.  If anyone would like the pattern, I’ll be happy to post it to you.  Just ask for the pattern in a comment, and give me a nice pat on the back to get me over my feeling of inadequacy!

On a happier note, I’ve started on my Christmas Cake.  Maybe a little late for the purists who seem to  make them months in advance of Christmas.  I’m using a recipe by well known Kiwi cook Alison Holst, known as Saint Holst in our household.  The fruit and a tin of crushed pineapple are  soaking together for a day or two, before mixing all the other goodies together.  Have to admit that I came rather late to baking my own Christmas Cake, making my first one only a couple of years ago.  And there’s no doubt about it, home made tastes so much nicer than a bought one!
Posted by Jenny at 3:54 PM

I will leave you with the pattern, too fiddly for me. But three little ones will treasure their own YoYo toy so much.

Well done getting them finished even if they are not your favourites.
I think we all have things that have not turned out the way we expect. However, we all have different tastes and someone will love them
Good lick with your baking instead.

I'm with you on yoyos' they are boring to make! I too am embarking on the major logistical exercise of Christmas cake cooking, my fruit is soaking in four tubs! Might I suggest the zest of an orange added to it? It brightens all the flavours beautifully xo

Well done, you, for finishing them. They look far too fiddly for me to tackle. Your Christmas cake sounds delicious.

Well done on getting to the finish line even if you don't fancy them as you thought you might. Oh Christmas cake time!

I have never made a yo-yo! I know some people like them but i have never been attracted to them. I make a Christmas cake but I never remember to start to soak the fruit far in advance - I am the only one that eats it and don't even know if I will bother this year, I might see if I can find a small one to buy instead - I do not like any of the candied fruit though and only use dried fruit in mine so I am picky!

Good on ya for persevering with the yo-yos. Like you they would not be a thing i'd do but i'm sure someone will love them.
Have fun with the cooking.

Well done on finishing the yo-yo's there not something I would do, they just don't appeal to me. Good luck with your Christmas cake, my daughter-in-law has made one this year, I don't eat it but my husband and daughter like it. I'm slowly catching up on projects that need finishing but still have a few to go. Judith nb Serena.

Kudos for finishing the projects and for donating them. I also do not like to work with yo-yos.

Oh I would love the pattern, if you are heading to Feilding way soon I could collect from you or if you are happy to post that would be lovely too

Sandra has asked for the pattern - so it will winging it's way to her home. I'm pleased that it is going to a yo-yo lover, there don't seem to be too many of them around, it seems.

Yo-yos have never really appealed to me but I do have a yo yo bed topper that Mum made in the early 80s from dressmaking scraps. Good on you for getting them made and off your “To Do” list. I’m sure someone will adopt them and give them the love they deserve.

Oh Jenny I just love your little yo-yo toys...on the Xmas tree! Good on you for tackling it. My cake is made & in the freezer. Yum! See you on Wednesday.

I would love the patterns too

Sorry Gean, the yo-yo pattern has already been sent out. I can not reply to you personally as you come up as a "non-reply".