It’s been a long slow week

It's been one of those weeks.  Robin has come down with some sort of lurgy, coughing, spluttering, aches and pains.  According to the Medical Centre when he went for his (unrelated) blood pressure check-up last week, it seems lots of patients who have recently returned from Australia have been presenting with the same symptoms.  Probably something picked up in the air flights, we all know that the circulating air picks up all sorts of bugs from travelers.  With a lot of TLC he is slowly coming right.  And then, wouldn’t you know it, the bugs jumped over to me - how’s that for sharing!

I managed to get the pieced backing completed for my Aussie quilt top, before feeling under the weather.  So much so, that I’ve had to take myself off for a nana nap during the week, something that I never do.  Guess I needed to rest up, after those disturbed nights lately. 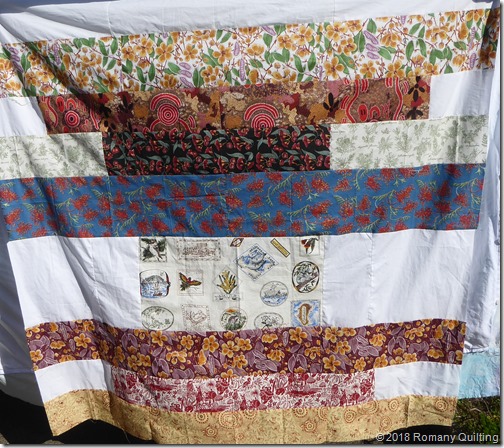 I then summoned up some energy to get the quilt layered and pinned.  Gemma thought that was an invitation for her to come and play too.  Seems the batting is not wide enough, I had to cut some off the length and stitch it down the side to make it fit. 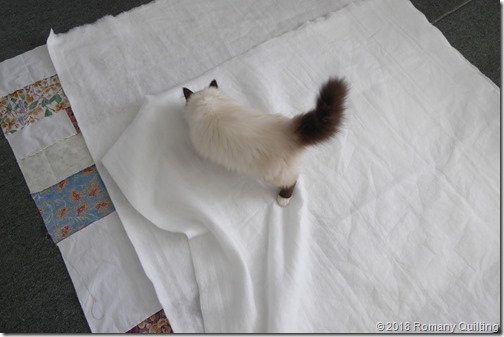 My attempt at machine quilting was disastrous, puckers underneath which meant I had to spend some time with my quick-unpicker.  I hate that, don't you?  Guess I’m not quite in the right frame of mind to be spending too much time sewing.  I’ll try again later when I’m feeling a little better. 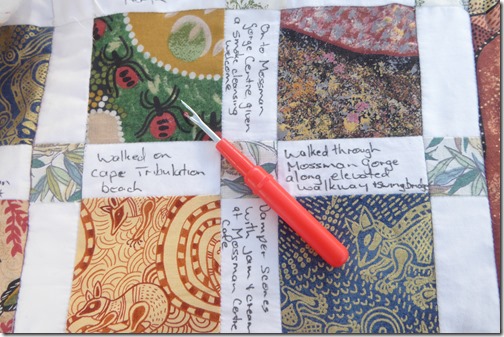 Sorry to hear you are unwell. Yes, planes are a great place to catch all sorts of bugs.
Glad you have made some progress on your quilt but it looks like you will need to be patient and wait until you feel much better,
Good luck.

That isn't the sort of sharing that you would like Robin to do. I hope you are both over the lurgy before long. I agree that it is best not to try anything too ambitious when under the weather. Take care.

Oh sorry you are under the weather! It's hard to concentrate when you feel so "punk", isn't it? I usually end up reading--so as not to mess up my projects...;)))
Your Aussie quilt looks lovely--I just really like the writing on it a lot and the back is nice and scrappy..great piece feel better soon hugs, Julierose

Oh that's awful getting sick after your holidays.
Nice to have gotten the backing organised before you felt yuk...
Get well soon.

I hope the bug that found you and Robin on your trip has decided to pack its bags and move on. Rest when you can to regain your strength.

Sorry you have both picked up a nasty bug. We Aussies do love to share lol! I think perhaps rest and recuperation are the ticket for you. Feel better soon XX

hope you both feel better soon - my sister who frequently flies is constantly coming down with something. You might have been feeling too tired to quilt - hope it works out better next time you try

Hope you are both feeling well again soon.
Hope your plan for quilting works out soon. xx

Hope you have a speedy recovery.