The summer weather down here in New Zealand has us suffering from meltdown – with temperatures in the late 20sdegC and yesterday hit 32degC, with high temps to remain, we have been told.  That so much hotter than we usually experience.  But with a nice cool shady spot, plenty of refreshing water to drink, the occasional coffee, and a little stitching, and/or a book to read, I’ve been managing in the heat. 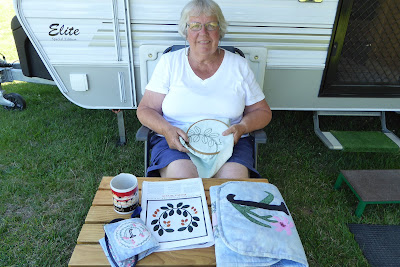 Stitching in the shade

As usual, we like to have a good look around the areas we travel through, and come across a sorts of interesting things.  Such as this sculpture of legendary race horse Phar Lap who was born and raised not far from where we staying in Timaru.   I grew up with hearing tales of his racing prowess from my parents, who were both rather keen on a flutter or two.  (Not me – the gambling gene has passed me by).  Phar Lap raced mainly in Australia,  including the 1930 Melbourne Cup, and he died in mysterious circumstances (possibly poisoned) in California in 1932.   His feats remain incomparable, and his great achievements lifted the spirits of people everywhere throughout the Great Depression.  Although I have to admit to not having the slightest interest in horse racing or gambling, it must be acknowledged that New Zealand has bred many outstanding race horses over the years. 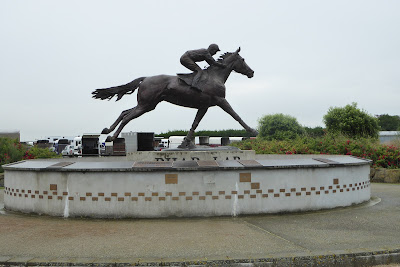 We spent a delightful afternoon at Peasant Point Museum and Railway riding this tiny railcar.  This little darling is quite unique, we were told.  New Zealand Railways built only two of these which ran on branch lines in Southland from 1926 to 1931 – and sadly, no one knows what became of them.  RM4 was rebuilt from original plans and photographs, and is on a 1925 Model T Ford truck chassis.  The railcar then needed turning on the turntable for the return trip, and Robin volunteered  to help the driver with this task. 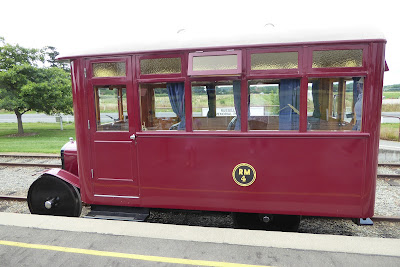 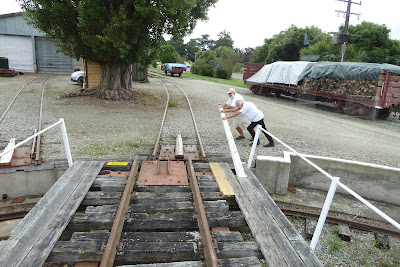 After all this excitement we stopped for an ice-cream at a sweet little ice-cream parlour – that certainly went down a treat! 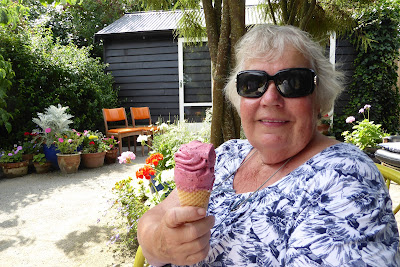 Then we moved a little further north to Ashburton, and had a great day exploring the countryside from our base.  We drove along dusty gravel roads and past bare, barren mountains.  No wonder the Lord of the Rings were filmed in this part of New Zealand, the scenery has that desolate, forgotten look about it. 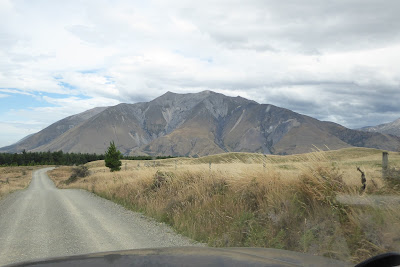 In the middle of nowhere

And I loved this cute road sign, and just had to stop to take a photo.  The GPS told us to turn left at Dog Box Corner, to take us back to civilization. 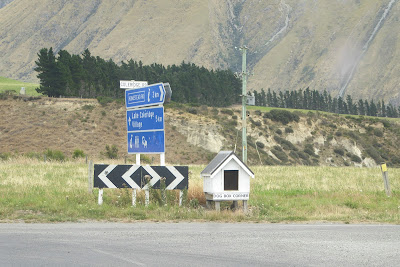 We have now moved on to Christchurch, and have people to meet up, and places to go while we are here.  It was very pleasant sitting outside after our evening meal under the shady awning, watching the day slowly come to an end.  We are under the flightpath to Christchurch Airport and plane after plane kept flying overhead as they made their descents.  The temperature slowly cooled and we watched the colours of the sunset – pretty peachy-pink against a blue sky. 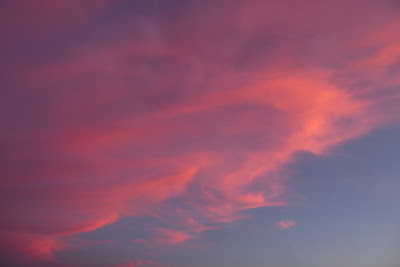 Sunset over Christchurch
Posted by Jenny at 2:01 PM

hot temperatures can making camping miserable unless you make the best of it and like you say stay in the shade and drink plenty of liquids. It looks like you love looking at the scenic places like we do - love driving in the back of beyond seeing scenery off the beaten path - have fun - we intend to get back to our travel in the summer here in the states

I'm glad you've got a shady place to sit and stitch. I don't handle heat well, and 32°C is too warm for me.

Please send those temps to us as they will be cooler than anything we will have this weekend.
Love seeing the statue of Phar Lap. He sure touched a lot of hearts in both our countries.
I think Dog Box Corner is a great name. Hope it always stays that way.

So glad you are enjoying your travels and managing the heat as best you can.

Ooh that ice cream looks divine! Good to see Robin pulling his weight LOL. Love sunsets, and your photo is just beautiful. Stay as cool as you can! It's decent here in Florida, only 20sC so far this first week. I'm okay with high 20s!

You are certainly having an interesting time - I look forward to the time we we can do a proper road trip of the SI. Up here the heat is hitting us too - shady spots, fans and the odd water hole are the order of the day!