Time for a little Stitching

I’ve finally found time to start my holiday stitching, after several days on the road at the beginning of our South Island adventure.  We arrived in Christchurch yesterday, and after this city had experienced two weeks of unbelievably high temperatures in the 30s, yesterday afternoon was wet, wet, wet.  Just as well, as the region is very dry indeed.  So what better to while away an hour or so starting my holiday projects.  With several projects packed, it was a matter of deciding what to choose. 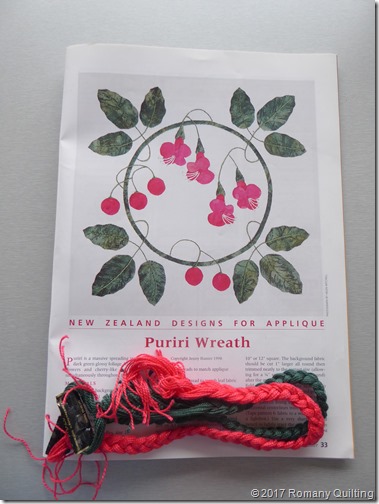 With nine blocks traced of New Zealand tree and blossom designs, I decided to start with Puriri Wreath.  Although these patterns are designed for applique, I’ll be doing my blocks as stitcheries.  They won’t look quite the same, and I’m sure I’ll enjoy stitching them.

I’ll back track a little and give you some highlights of our trip down from the North Island.  Cook Strait separates the North and South Islands of New Zealand, so the only way to travel with a vehicle is to board one of the roll-on roll off ferries.  Our trip was lovely and smooth aboard the Kaitaki.  Cook Strait can be notorious for rough weather and high swells, but our trip down was great – just as well as Robin is a rather poor sailor. 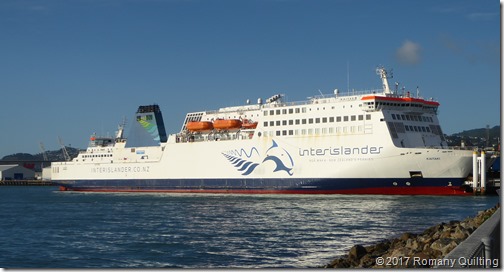 We crossed on board the Kaitaki 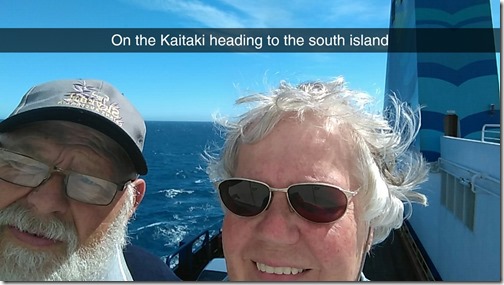 Windblown selfie taken on the trip

Disembarking the ferry, we left the busy port of Picton, and drove through the Wairau Valley.  Grape vines have been planted in this part of the country, as far as the eye can see, together with their respective wine making establishments.   Big money and big business indeed, fortunes must be tied up in all these thousands of acres of wine plantings and the specialized people and equipment needed to develop world famous wine. Grape vines as far as the eye can see

We stayed the first night at the NZMCA park in Murchison, and right next door was a lovely old historic Commercial Stables building, now a 2nd Hand Shop.  I bet this building would have have interesting tales to tell from years gone by.

I love this old building

On the road again the next morning we saw one of the results of that massive 1929 earthquake when we stopped at Maruia Falls, on SH65.  There was a nice large car-park set away from the busy road, plenty of room for our 4WD and caravan.  And what’s this we saw poking around in the bushes – it’s a weka, one of our native flightless birds. Weka foraging in the bushes

A landslide in the Maruia Valley, a result of the 1929 earthquake, diverted the course of the Maruia River further west, forcing it to cut a new channel over an old river bank. Once the river had eroded the gravels, the bank became the Maruia Falls. 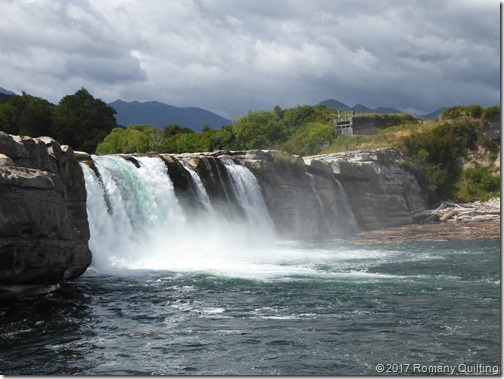 We are currently staying in Christchurch for three nights, to catch up with son Michael.  It’s been a while since we last got together, so it was lovely to have some time together.  After a good chat, and a home made coffee courtesy of his fancy coffee machine, we took him out for lunch. 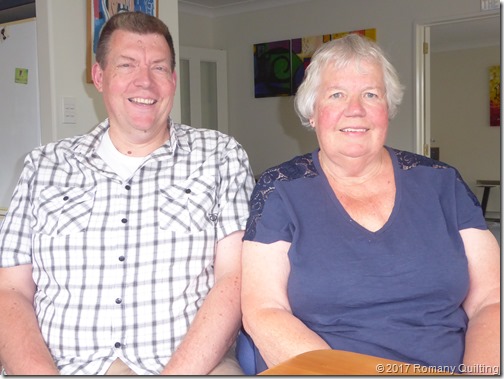 Michael and his Mum

There will be more adventures to follow, I’m sure, and hopefully a little more stitching time too.
Posted by Jenny at 5:23 PM

Ditto for a fair and smooth crossing, we will be there in February. The falls are stunning, great to catch up with family, hope you get some cool days.

You have managed to fit quite a bit into your first days. Yes, I remember being told that crossing can be rough. Glad it was good for you. Good to know Christchurch had some good rain. They need things to go right for a while.
Enjoy your family visit.

Beautiful photos Jenny and so nice for you to spend time with your son.

Looks like your trip had to a fantastic beginning. I love the photo of you and your son. Enjoy your visit.

Enjoy your journey. We had a fabulous week down south island & loved Stewart island very much. It's unspoiled paradise. Just beautiful.

Enjoy your travels. We had a fabulous week down the bottom of the South Island & Stewart island is just paradise. Dunedin is lovely at the moment with all the shops decorated for Christmas.

Looks like you are visting some very nice and interesting spots on your trip. Lovely to catch up with your son xx

I love those bird stitcheries Jenny. And of course your wreaths are a fantastic hand project. Weka is a word I must remember for scrabble.
Your country is so boundless and beautiful; I love seeing these photos. A wonderful selfie of both of you.
Captain Cook also named a lot of places in our country.