A little Retail Therapy in Dunedin

We are now staying in the Dunedin area, to catch up with my old school friend Merilyn and her husband Colin for Christmas.  As I’m still after a few skeins of Perle No5 for my stitchery projects, Merilyn took me to Threads Bernina in the city. 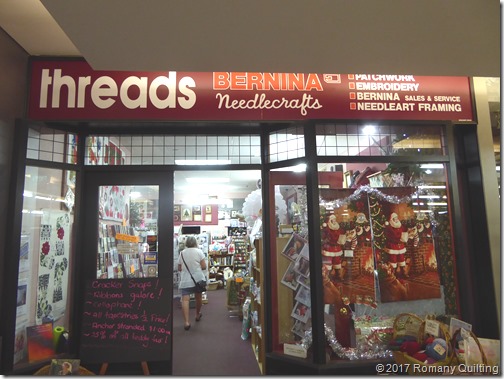 I had quite good success – and found three out of four colours I was after.  Still need to track down the dark green I will be using in all my blocks, so I will need several skeins of this particular colour, Perle No5, colour 500.  But I’m sure there will be more local shops that I will discover on our trip, so hopefully I will be able to buy the remaining colour sooner or later.

The friendly shop owner gave me permission to take some photos of her shop, and I drooled over the lovely range of batik fabrics on offer.  I could have happily purchased some of the luscious colours, but these days  I really prefer to buy fabric as needed. 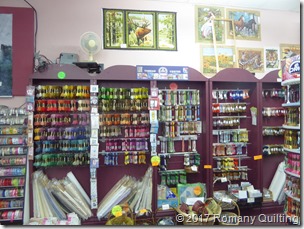 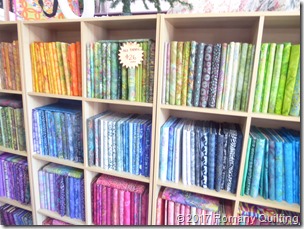 Lots of goodies in this shop

It is so nice to catch up with old friends, and we have enjoyed a couple of tasty meals at their home while we have been down here in Dunedin.  Merilyn reminded me of the cushion I stitched and gifted her for one of her birthdays, and thought it was just right for her as she is an avid gardener. 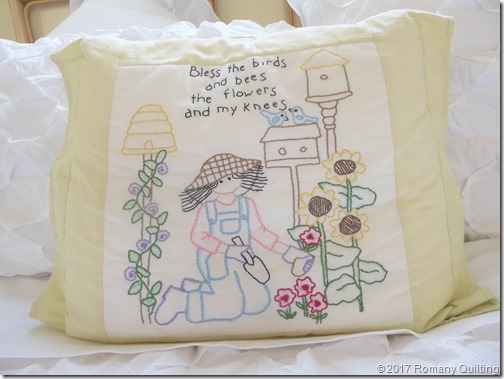 Cushion I made for Merilyn

We have been exploring too while we are here in Dunedin, and it was great to go back again to see the magnificent Dunedin railway Station, which is a real work of art.  The rather grand Railway Station was built in 1906, built in “Flemish Renaissance-style” of white Oamaru limestone facings on black basalt rock. It is such a beautiful and ornate building it is no wonder that architect George Troup was given the nickname of Gingerbread George. 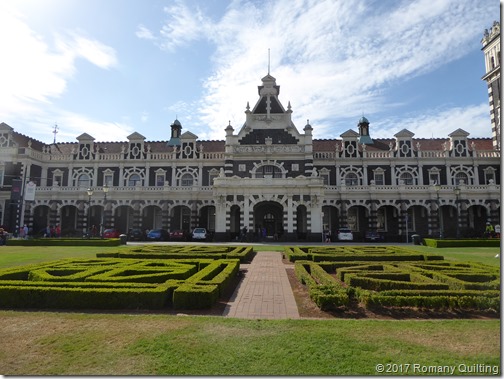 And the interior of the building is just as glamorous.  The booking hall features a mosaic floor of almost 750,000 tiles of Royal Doulton porcelain.  It is all simply stunning. 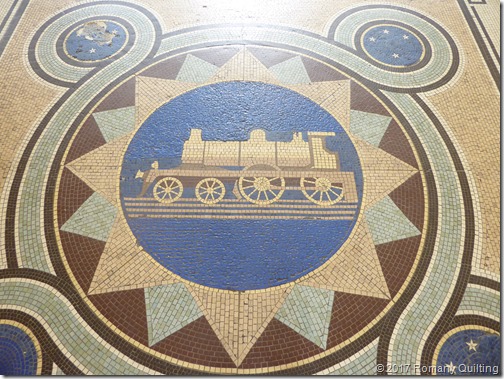 Our hosts directed up the long, windy drive up Signal Hill to get a marvelous view over the city. 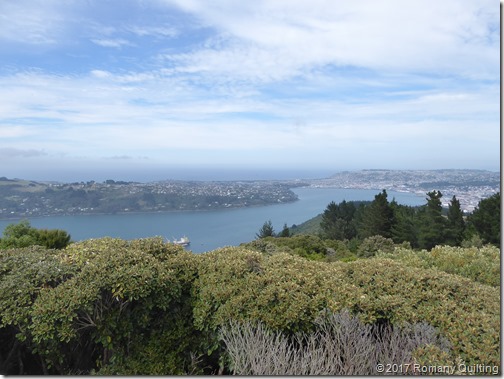 View over the city and harbour

Dunedin is famous for Baldwin Street which is known as the “World’s Steepest Street”, and signs warned that it is not suitable for campervans, or caravans, for that matter. But honestly, who would even want to drive up there, let alone take a camper or caravan! 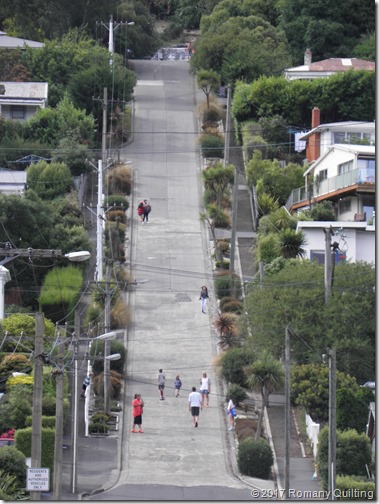 We peered through the distance from the bottom of the street watching as one young lad had almost reached the top hopping on his pogo stick. stick.  Young Harry had set himself the challenge to pogo stick up the world's steepest street to raise money for Ronald McDonald House, while his little sister  Darcie was undergoing treatment at Christchurch Hospital.  Isn’t that wonderful!

We will be staying at Dunedin for a couple more days over Christmas before moving on.  It’s lovely and warm today, and I’ve got the washing done and hanging out to dry in the sunshine.  So I’m a Happy Camper indeed! 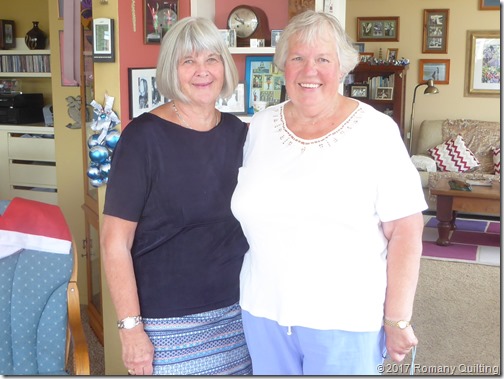 That’s me with my friend Merilyn at her home
Posted by Jenny at 12:25 PM

Dunedin is a place we could have spent more time at. Unfortunately we didn’t get to see the interior of the railway station as there was a function going on. We did, however drive up signal hill. What a viewpoint. Enjoy your Christmas with your friends. Merry Christmas to you both.

Good to see you are collecting the threads you need. The station looks stunning and so do the views. have a great time.

It's wonderful that you took the opportunity to visit with your friend, and I love the pillow you stitched for her several years ago.

The rail station is stunning. I'd love to see it in person and spend some time exploring.

Happy Christmas, Jenny and Robin. What a fantastic shop, we will be there, somewhere thereabouts, in February and then at Arrowtown in March, our cousin told me today there is a marvellous embroidery place there, so if you would like me to see if your missing thread is there, just let me know. Hope your weather is fine, and like Goldilocks, not too hot or too cold. Fond greetings.