That's the name of my latest quilt – full of lovingly hand stitched  candlewick blocks. With splashes of bright pink which remind me of a big bowl of summer raspberries and ice-cream, how about “Raspberry Ripple”?  I agree it may sound a bit fanciful, but that’s the name that came to me.  What do you think? 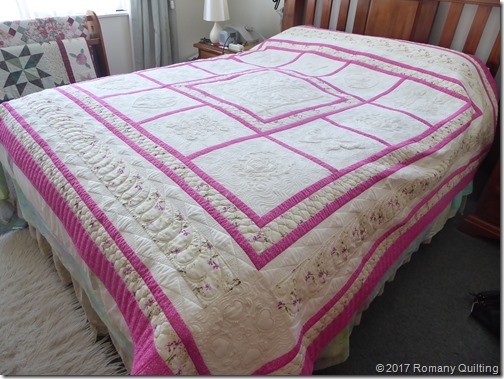 I have to admit that this is a very old UFO indeed.  I traced out the candlewick blocks and packed them, my cotton thread, needles and small scissors away in my suitcase when we travelled around England for three months way back in 1999.  I sat and stitched them in the evenings after a hard day’s sightseeing. 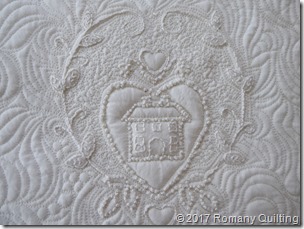 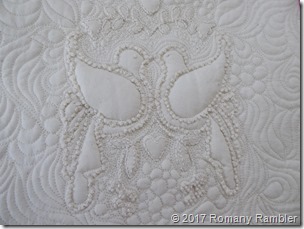 Twelve blocks surround “Ribbons and Lace” in the middle, a larger pre-marked mini which I stitched some time after we had returned home from our trip. 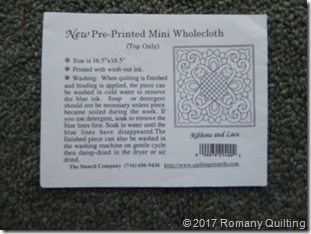 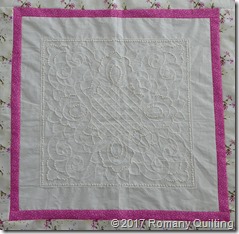 And the quilting angels were smiling down on me when Sew Wot friend Moira brought along some candlewick blocks she no longer wanted.  She was having a clear out and looking to pass them on, and I was so happy to take them off her hands.  I  used four of Moira’s blocks in the corners of the quilt top. 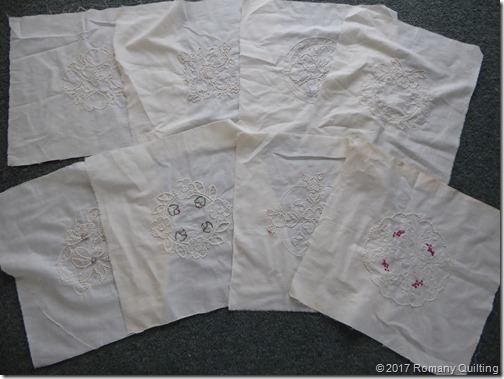 With the top finished it had to wait for a trip to Linda the Razzle Dazzle Quilter to work her magic, then another wait till we were passing by Taupo again to finally collect it.  We continued on our caravan trip up to Hamilton, and took a slow trip back, moving the wrapped quilt from pillar to post around the caravan.  During the day it was placed on our bed, out of the way, and at night it got moved down to the seating area when we went to bed.  I likened it to a very big swaddled baby – although Robin tells me it’s like moving a dead body around! 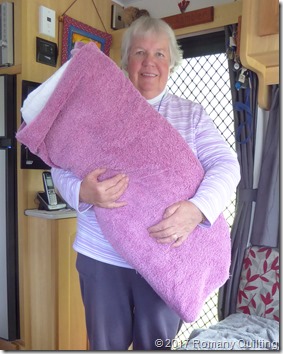 I’ve been diligently hand stitching the binding down.  It’s a large quilt at 90 inches square.  And at last I’ve finished so have taken some photos to share.  No, not quite finished, as Robin commented, I still have to add the label.  I’ll attend to that shortly. 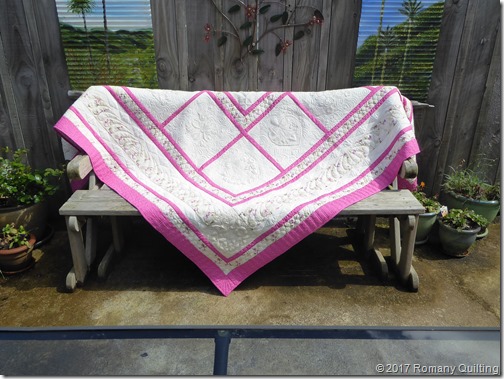 After the morning showers, Raspberry Ripple is enjoying an outdoorsy photo shoot

And to say I am thrilled with Linda’s work is an understatement – I just love what she has done to transform my quilt top so beautifully. Linda has stitched feathers, pebbles, matchstick quilting, and her version of McTavishing - her work is superb indeed. 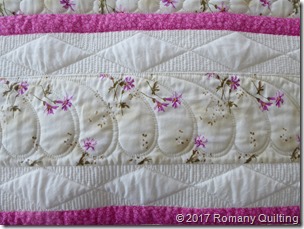 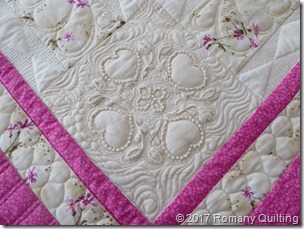 Such a lovely quilt. I'm sure you had no idea when you started what a fabulous thing you would end up with! Raspberry Ripple is a great name. :-)

That's right Katie. When I started stitching those blocks all those years ago I didn't really envisage how it would end up. I'm really thrilled with it and love how it all came together.

truly scrumptious!!! Linda, you, your friend, the distance those blocks have travelled, and now it has a place where you, and sharing with us , can all see its beauty.

I think "Raspberry Ripple" is a great name for your beautiful special quilt Jenny.

Well, the combined work of all three of you ladies has produced a beautiful quilt. Raspberry Ripple is the perfect name. It looks lovely on your bed.

Gorgeous work: I ❤️ everything about Raspberry Ripple!

What a lovely write up you have done on this treasure - I know you will continue to appreciate this quilt for many years to come.

Love the picture of the quilt getting an airing in the outside sunlight.

A very lovely quilt Jenny. I am looking forward to seeing it in the flesh on Tuesday. I am sure it will be an absolute treasure.

Raspberries and Cream is well named, its a beautiful quilt, love the printed fabric too.

Thank you everyone for your nice comments. And Deb - you seem to be a "non reply blogger", did you know that?

Thanks for the close-up photos of the quilting. Beautiful blocks, a long time waiting for their day to shine, but it all worked out perfectly with Moira's additions and the quilting.

Well worth all the time you work on it and the time in between. It's simple stunning!

Thanks so much for linking up to last week's Stitchery Link Party. Aloha hugs!

Greetings from Colorado. I saw your quilt as I was surfing around the Internet, and had to stop in to tell you how amazingly beautiful it is!

The quilting is to die for. So much detail, so much love. You must be so pleased this quilt is now completely finished and can now spend time admiring all the handy work, perhaps even when you are lying in bed. WOW.