My turn to host the Sew Wots

We take turns to play hostess to the Sew Wot group and my turn rolled around on Tuesday.  There was a full group, except for one of our ladies who is recovering from surgery.  Our elderly cat  Muffy made a beeline for Pam, and the two of them were squashed up in the Lazy Boy chair, when Muffy insisted on lying down behind Pam, while she was perched on the front of the chair.

Helen had brought along her two entries in our recent quilt club Challenge – a very wise looking owl, and a Tiki.  Check out that red rosette pinned to the owl – Helen won First Prize in the Advanced Section!  Well done, Helen.  And many thanks for the lovely flowers. 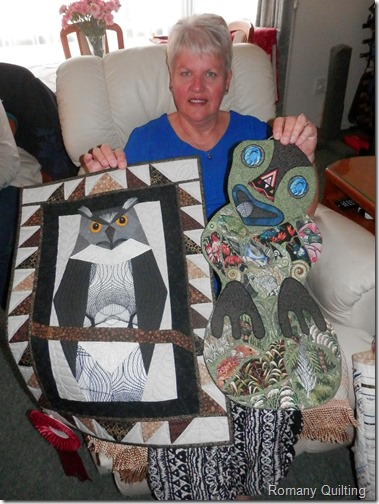 The owl and the tiki 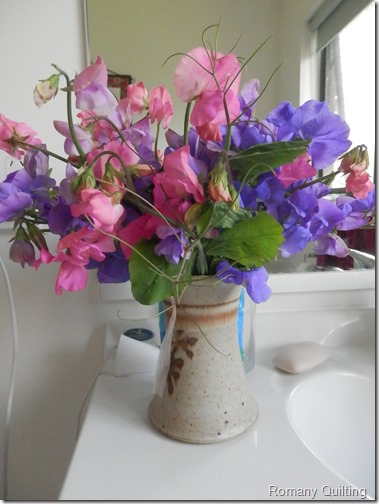 Helen brought me a bunch of Sweet Peas from her garden

Carol’s contribution to Show and Tell were two cute little stuffed dogs, made from an Indygo Junction pattern.  They took an awful lot of stuffing, she said.  The red dog is staying with Carol, and the pretty purple dog will be a gift for her grand-daughter. 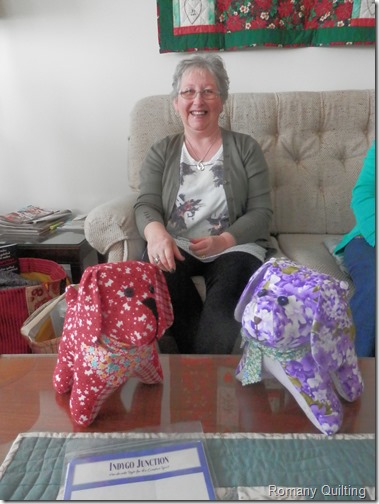 Carol with her colourful dogs

You can tell Christmas is not far away when a Tree Skirt makes an appearance.  Heather B had finished this just in time to give to her daughter. 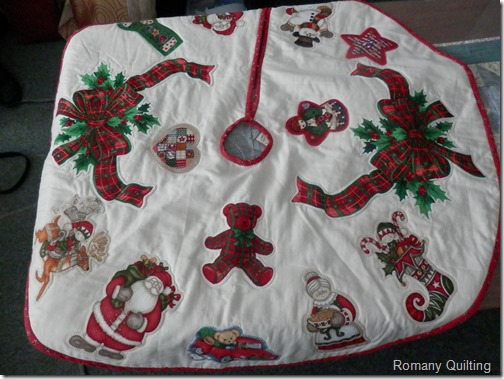 And what about these two little cuties?  Heather B was putting the finishing touches on tiny little Father Bear.  Mary decided he needed to have a friend in the photo, and she passed over the pretty dolly hanging from her scissor fob, so they could pose together. 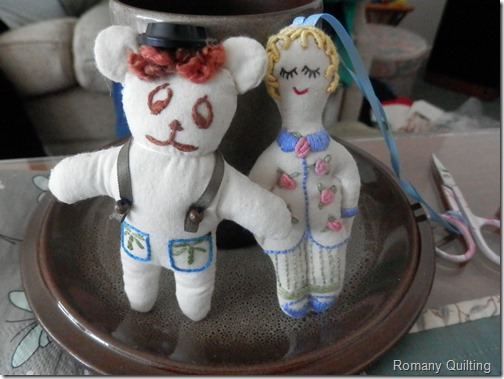 In between chatting  and morning tea, everyone was busy stitching.  Heather E was stitching even more hexagons together, she is a real whizz doing these.  Moira was working on another of her William Morris blocks, and Carol was doing a dainty stitchery.  Mary had found a real Op Shop bargain of a panel - a set of dressing table runners.  She had added some of her beautiful crochet edging, and was now embroidering them.  I didn’t even get my stitching out, much too busy taking photos and organising morning tea.

Our next fortnightly get-together will be rather special, as we will be lunching out at a cafe for our Christmas “do”.  There we will have a big reveal on the surprise gift we have been making.  Everyone was given a name so it will be fun to see who gets what.
Posted by Jenny at 5:03 PM

Those sew wots are a clever bunch!

Love that owl, and Indygo Junction, I have made a bag, finished yesterday, from a pattern given to me by a friend. Super stuff on their web page. Enjoy your next sew wots get-together!!!

Some amazing projects here. Love the animal projects especially. You certainly have a lot of talented Sew Wots in your group!