I hardly seem to have made a dent in my selvedge collect.  Even though another couple of selvedge projects have now been completed.  Mind you, I did have a big bag sent to me recently from Roz, just prior to her departure to relocate in Oz.

Another set of breakfast place mats have been on the go for a wee while.  First I made a whole pile of these.  Nice easy sewing on to calico backing squares. 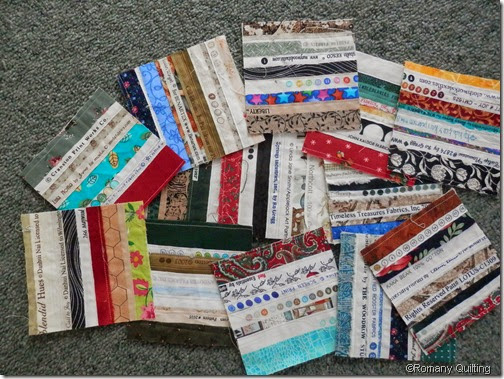 These were soon assembled into rows, backed, and quilted.  Then finished off with a black binding.

And why not make myself a new double handed oven cloth, I decided.  With slip in pockets for my hands, hessian (sacking) on the back, plenty of wadding, this should last me for a while.  I’ve got a couple of others, but a new one won’t go astray.

Ever heard of selvedge knitting?  I got the idea from the very talented Amanda Jean of Crazy Mom Quilts.  Read all about it here to make a knitted rag rug.  The instructions said to use size 35 needles, but I had no idea what they were – just used the largest ones I had.  The other change I made was to stitch the selvedges together instead of knotting them and leaving tails.  I also decided to use a single string instead of two together as the instructions said. 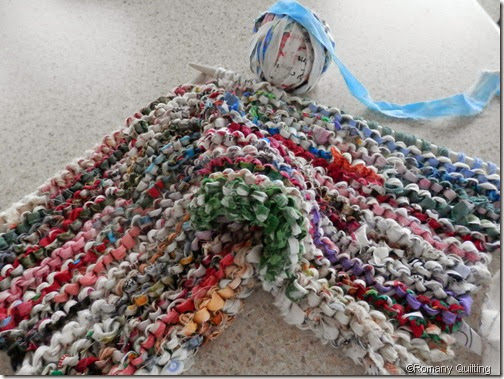 Knitting and my big ball of selvedges stitched end to end

Just love all the different colours coming through, offset by the various neutrals.  I used up long lengths, and shorter selvedges too, whatever came to hand, but kept the short lengths less than 12 inches for other projects.  Here is the finished rug, it fits in nicely in front of my laundry tub, adding a nice splash of muted colour.  I’m really pleased with it.  Robin did wonder what on earth I was doing in the evenings, wrestling with large needles and a big ball of fabric,  which was regularly replenished. 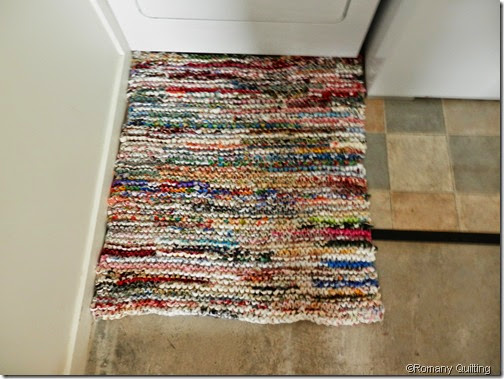 I love the way your rug turned out. Nice work!!! It does take a bit of wrestling, doesn't it?

WOW! Jenny love those placements and oven glove out of the salvages.. the mat looks great but not sure I am into knitting them..

Thanks ladies for your comments. A special thank you to the very talented Amandajean whose pattern I used, and took the time to read and comment on my blog!!