It was quite unexpected – coming across a wedding gown amongst the tapa collection at Te Papa museum. This was made from creamy-white tapa cloth and came complete with a train and headdress. Made in New Zealand in 1997 by Paula Chan-Cheuk for Jackie Leota-Eti it combines both Samoan and New Zealand influences. The pale tapa cloth is highlighted with gold coloured braided cording and shells. 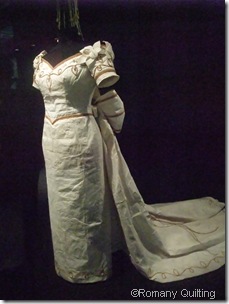 Also on display was a tapa chasuble, an outer vestment worn by Catholic priests when they are celebrating mass. The vestment was made in Tonga for Father John Faisandier and given to him on his ordination as priest in Heretaunga, Hutt Valley, New Zealand in 1978. It is hand painted with a combination of Christian and Tongan imagery. The Tongan pattern is known as Tokelau feletoa and a motif possibly representing olive branches decorates the border of the chasuble. The other images on the vestment are taken from Catholic iconography. The Virgin Mary is depicted on the front, and an image of Christ appears on the back. 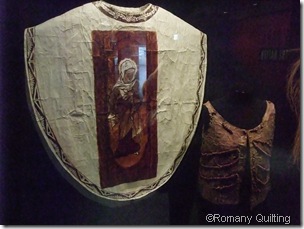 Tapa cloth is very special to the people of the South Pacific and is often given as gifts. These two wonderful garments are very special indeed and show a modern twist to the traditional tapa cloth decoration.

Thank you for sharing such wonderful examples of tapa cloth. The chasuble is perhaps not unexpected but that wedding dress is simply wonderful - an amazing fusion of cultures which could stand out in any culture as a beautiful garment.
Jenny F