Our seemingly never ending caravan trip around the South Island has come to an end.  After 80 days away, it was finally  time to head home.  This snap was taken at the Picton Lookout, and you can just see the Inter Island Ferries behind us. 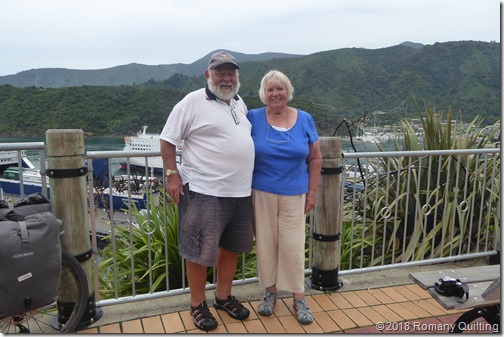 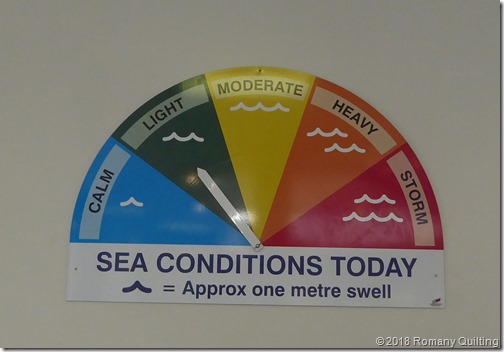 Should be a calm trip

Finding ourselves a table aboard, we settled down to the journey.  Things got interesting when the Captain announced that a drill was taking place.  After several blasts of the siren, staff members came with life jackets to show how to put them on, and answer any questions.  Other scenarios took place, a life boat drill, and a (supposed) fire in the engine room,  reminding us on the loudspeaker that this was only a drill for staff training taking place.  Just as well it was a drill, because my heartbeat certainly got raised when the Captain started calling out, “Abandon ship, abandon ship” very loudly! 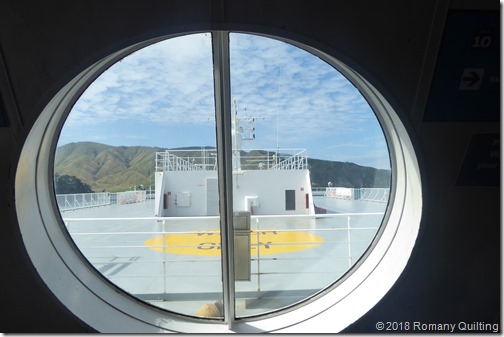 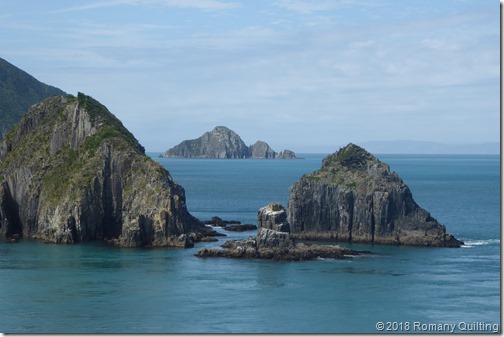 Views from the trip

Our journey from Picton to Wellington

We arrived home to a huge pile of mail, including our Census Forms which had to be dealt with pronto. The caravan is unpacked, and the caravan fridge needed a really good clean after it had been assaulted by a jar of pickled onions which tried to escape!  Several loads of laundry have been done – it’s not as if I neglect this task while on holiday.  But washing, like rust, never sleeps.  And I had been to umpteen different laundries while away on our trip, including this one with the interesting sign outside.  There is no mistaking what that is! 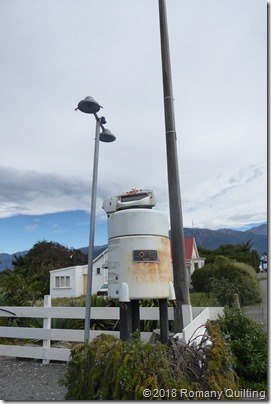 This way to the launderette

So now we are home again, I’m hoping to reacquainted with my sewing machine again.  Perhaps tomorrow.
Posted by Jenny at 4:17 PM

Welcome home! I'm glad your trip was a safe one.

Love the wringer washer- I have lots of memories of my Mom using one when I was growing up.

Eighty days! Wow! It doesn’t seem that long since you left. You have had a wonderful time.

My mother had a copper in the house when we were growing up, which needed a fire lit underneath to heat the water. I remember when she finally got the copper removed from the wash house, and had a ringer washer put in. And when I was first married I had a wringer washing machine for many years, finally updating to an automatic machine quite some years later.

Welcome home. You had a wonderful journey and it was lovely to meet you as you passed through Timaru.

Such an adventure that you've had! Will it be difficult to settle down now that you're home. Enjoy getting back into routine. :)

there is always so much to do when you get home - although we leave a lot of things in the camper permanently there is always stuff to bring back in the house like you say, and the grocery shopping, the laundry - you well be back to your routine before you know it - I have loved following along on your journey thanks for sharing!!

Copper and two tubs, a hand wringer and the blue bag for whites!! So glad the crossing was smooth. We are off further south today, and I should have a post done before we start off again. Southern hospitality and generosity have no limits!! Love your view with the ferry below,.

Welcome back to the North Island! As a born "n" bred South Islander who has lived in various towns there, your trip details had me feeling very nostalgic at times. Thank you for igniting memories. Enjoy your time back at the sewing machine!

You've had am amazing holiday and thanks for taking us along but it's always nice to be home...

It has been wonderful to follow along with you. Hope you have no trouble settling down again. Good luck.

Have just scrolled through several of your blog posts ... Looks like you had an absolutely wonderful trip! ~ Quilting Gail

Glad you are home safe and sound and I can't believe it's been 80 days. And not without a little drama...the cyclone I mean. I enjoyed seeing your photos...immense stump, tui, and the gorgeous yellow tree, and your stitcheries too along the way. Quick question...did you use chain stitch on one of the wreaths? Very effective whatever it was.
No place like home!

Thank you all for the comments and good wishes. And I'm pleased that the overseas ladies in particular have had a good look around the South Island of New Zealand with me. Kiwis, of course, are well aware of what a beautiful country we live in.