It was a special Sew Wots morning indeed – we were wishing Moira Happy Birthday as we celebrated her 80th Birthday with her.  Flowers and gifts were presented, and we wished her well.  Moira commented that she couldn’t believe she was now 80 – seems the years sneaked up on her while she wasn’t looking.  Carol was the hostess and the dining table looked a picture, full of goodies and a luscious chocolate cake with candles for our morning tea. 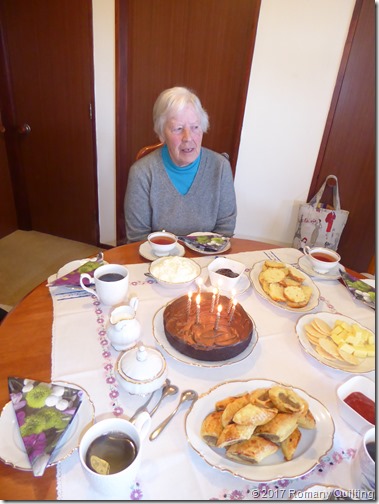 There was a whole lot of chatter going on, plenty of quilting magazines to flick through, so not many of us did much stitching at all.  In fact, although I got my latest Christmas stitchery block out, I eventually put it away without doing a single stitch.  Mary was stitching though, and showed me her large wool and felt hexagon blocks she was working on. 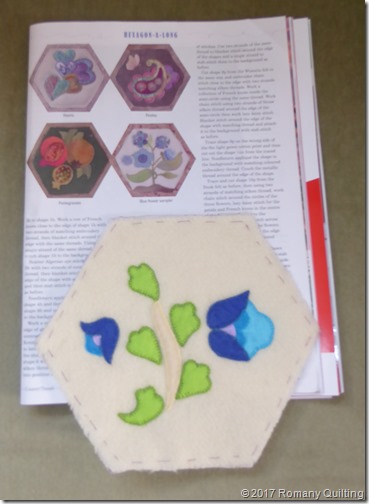 And Heather B was cutting out the makings of a fabric book – this was “The Twelve Dogs of Christmas”.  The fabric book will be going in her Grandmother's Box for the next generation.   Snip, snip she went on her lap, and luckily didn’t put the scissors through her clothing – although I was rather worried that she would, I must admit. 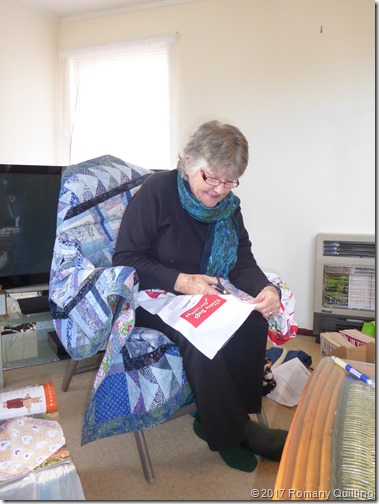 Heather B cutting on her lap

There were two lovely quilts to admire as well.  Carol recently went away to a weekend quilting retreat and all the attendees were given a small kit to make some blocks.  These kits comprised of pieces of former Sew Wot Pam (who passed away a while ago) fabric so the quilt is really special.  In memory of Pam it will be donated to Ronald McDonald House to give comfort for a youngster in need. 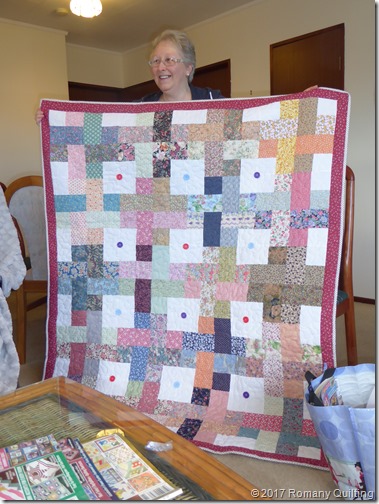 Carol holding quilt made with fabrics from Pam’s stash

The other quilt brought along was a gorgeous Poppy quilt made with large Apple Core blocks.  Helen made this for her Mum – just love those rich red poppies. 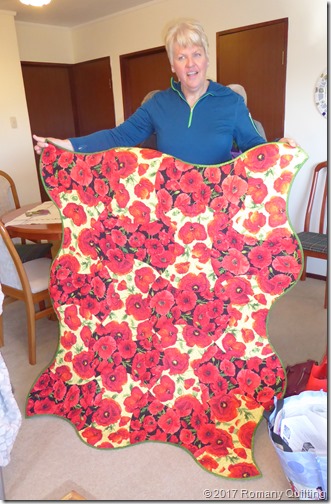 Helen with her poppy quilt

It was great to meet up again, as I wasn’t able to attend the previous get-together.  And we all enjoyed wishing Moira well for her special birthday.
Posted by Jenny at 10:05 PM

Jenny, I enjoyed your Sew Wots gathering - looks like you ladies have a good time. Moira is a youthful looking 80 y.o.

Happy birthday to Moira. Wonderful milestone. Some lovely projects by your friends and the Poppy quilt is gorgeous! How special to gift tye quilt connected to your friend Pam x

Love the quilt that Carol made. Do you happen to know the name of the pattern?

Your blog is a such an inspiration and I enjoy it very much – therefore I have nominated you for the Liebster Award and would be happy, if you accept the nomination. Head over to my blog for the details. Hope reading from you soon!