The roll of the dice brought up number four this week, which is my Soul Searching UFO.  I had previously sewn all the strip sets as “leader and ender” sewing, and also constructed several of the large blocks.  This week I had to make my choice from these. 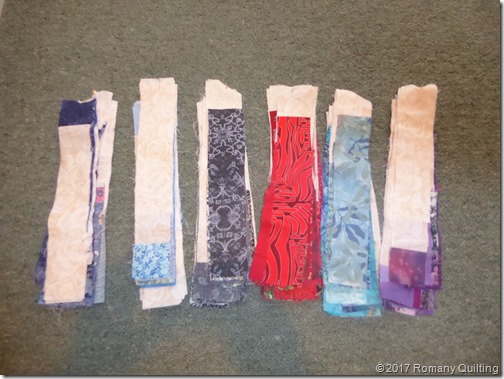 Strip sets left to sew together

So what colours did I chose?  So far the dark blue and light blue blocks have been put together. 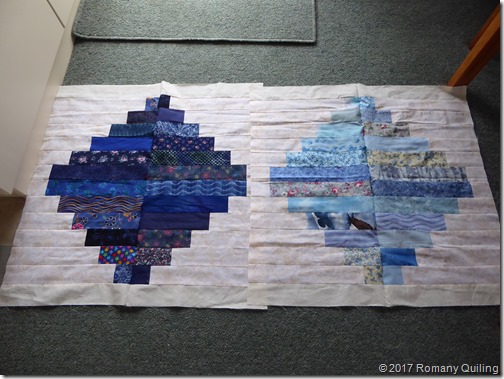 With red the next one to be worked on.  I like to lay all my strips out in order, to make sure I have them all in the correct order.  Those sneaky little strips have been known to lie there quietly the wrong way round, to see if I notice before they are pinned and stitched. 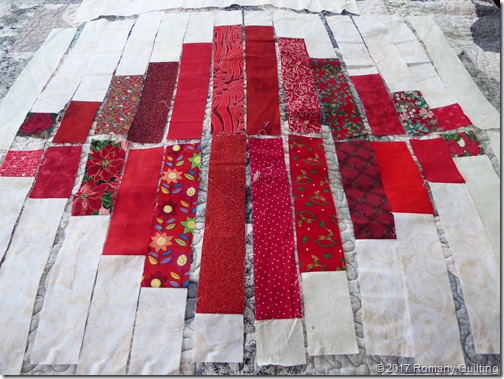 Starting on the red block

And I’m quite pleased with my sewing this week, in between other commitments.  Such as cooking – I seem to be doing an awful lot of this lately.  It’s winter in our part of the world, and to tell the truth, I love homely winter foods.  Recently I’ve made steak and kidney casserole in the crockpot, cooked up a big pot of curried sausages, made some soup, and cooked a big bowl of tamarillos.  As kids, we used to call these winter fruits tree tomatoes, who can remember that?  These days they are known as tamarillos and I love them cooked  to eat with my cereal for breakfast.  They are full of all sorts of good vitamins, and taste good too.  Robin doesn’t like them, so they are all mine!

Tree tomatoes, quinces, red and black currants, real tasty plums, ripe peaches, apples galore, and gooseberries, the green and cape, and then the PASSIONFRUIT. My Dad had all these and more in the orchard when I was a child. One more goody was peanuts.. Those blocks look wonderful, lovely pattern and fabrics.

Oh how good your dice 🎲 landed on the right number for "Soul Searching" the blues both look great and I bet the Red finish d too...
I had never heard of Tamiralos sew it was good to check out the link... seams like a delicious 😋 fruit....

Love how the blocks are progressing. Happy stitching.

I do like your roll of the dice for this week.

I agree about laying the strips out in order for this sort of projects - the last thing you need is for strips to go in the wrong way.

Hi Jenny,
Nice job on the two blue blocks! I like the fabric you chose for your red, too. I look forward to seeing where these blocks are going in the future. ~smile~ Roseanne

I have never tried a tamarillo. Love all your sweing this week x

Hi all, lovely to hear from you all. It's interesting that some of my Aussie friends have never come across a tamarillo - perhaps these fruits haven't made it over there yet?

Hi Jenny
Yes, tamarillos are available in Oz but like feijoas, are imported from NZ and at $2 each piece of fruit, are a luxury!

Hi, Jenny, I love seeing what you're doing with "Soul Searching." I'm working on "Soul Searching" also in my corner of the world here in the USA. Quilters around the world share so many bonds.

I heard them called tree tomatoes for the first time last week. A friend had cooked some for a crumble dessert. Yummy.
Love your blue blocks, so pretty. Yes, fabric pieces and partly made blocks do like to move around and catch us out!