We had a very interesting speaker last week at the Pinestream Quilters club night - Mary Brito, also known as the “Button Lady”. This lovely English lady had us in stitches when she related living at the back of the family haberdashery shop as a young girl. She was fascinated by the beautiful buttons in the shop, in particular the lovely glass buttons from Czechoslovakia. So she snipped the threads holding three cards of buttons, put them in a jar so that she could admire the pretty colours, and hid the incriminating cards (minus their expensive buttons) under the carpet. Her secret was soon found out, and she was in disgrace! 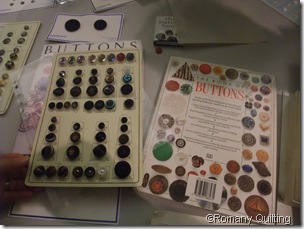 Mary told us about the history of buttons, from the hand made Dorset buttons, shell buttons, metal buttons, and on to the machine produced varieties. She brought along many examples to show us. The mention of rubber buttons on those Liberty bodices some of us had to wear as a child certainly brought back many memories. “You must keep your kidneys warm”, my Mother used to tell me. And didn’t those suspender belts from long ago have rubber buttons on them too? When Mary emigrated out to New Zealand, she became a button wholesaler, and travelled around the lower part of the North Island calling on department stores and the many haberdashery shops that were part of the local shops at that time. Mary was a delightful speaker, and so enthusiastic in her love of buttons. 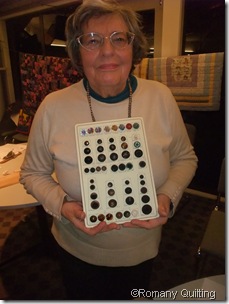 We had a visit to a lady here in our part of the West Country who had a fantastic button collection. She opened her house to us and believe me they were absolutely everywhere but it was a really interesting day. Certainly makes you look a bit closer at those old button tins again.
Shirley.x

That sounds a great meeting, buttons are wonderful aren't they?