Although I had packed my stitching bag, there wasn’t much spare time for hand stitching over the weekend – we were away in our caravan at Sanson.  This was a combined rally joining in with members of two other clubs.  We weren’t too sure what the weather gods had in store for us.  Although the weekend started out fine and sunny, heavy rain and gale force winds were predicted for Sunday. 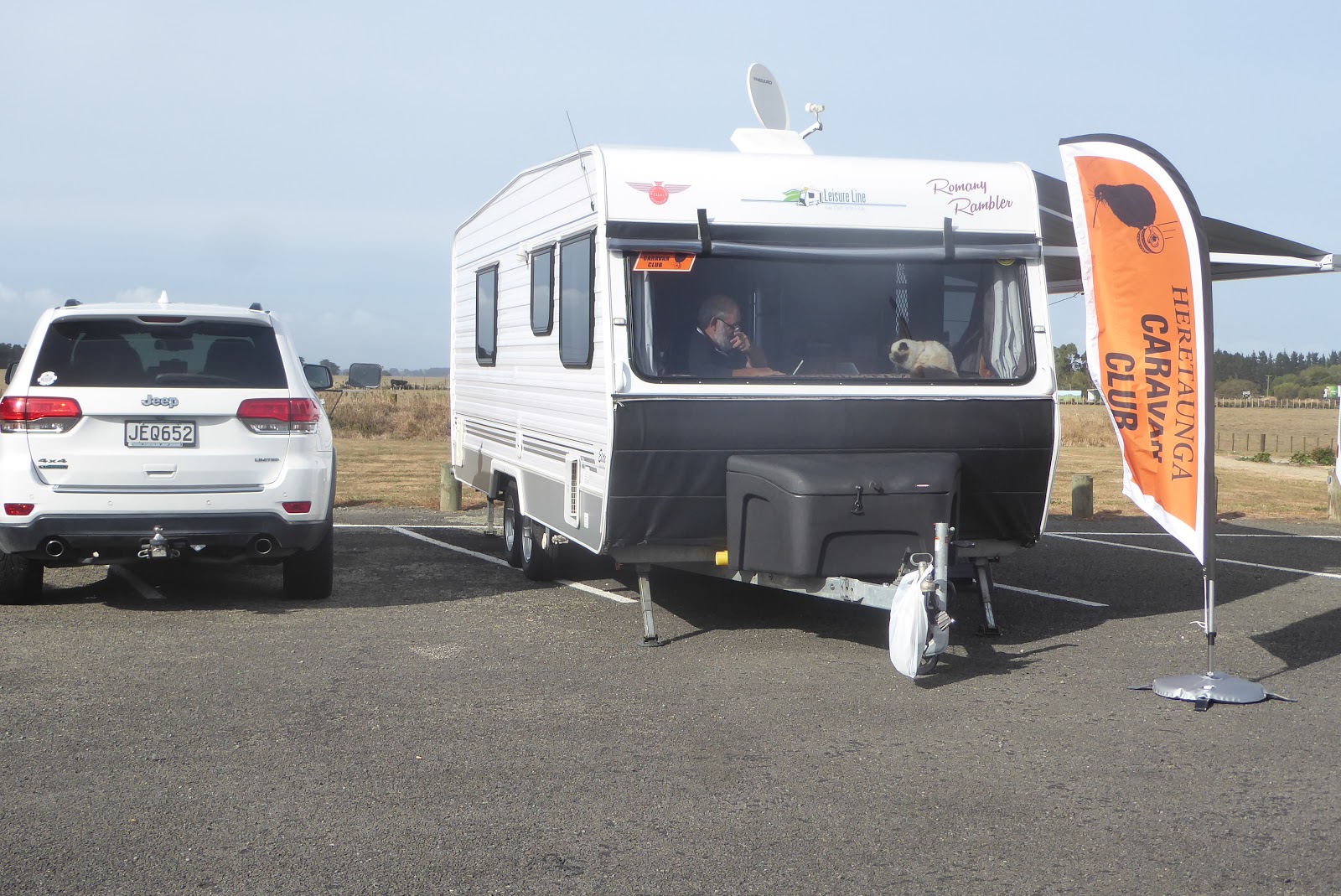 Gemma came too, of course.  She is very much at home in the caravan and did what cats like to do, lying down sleeping for most of the time. 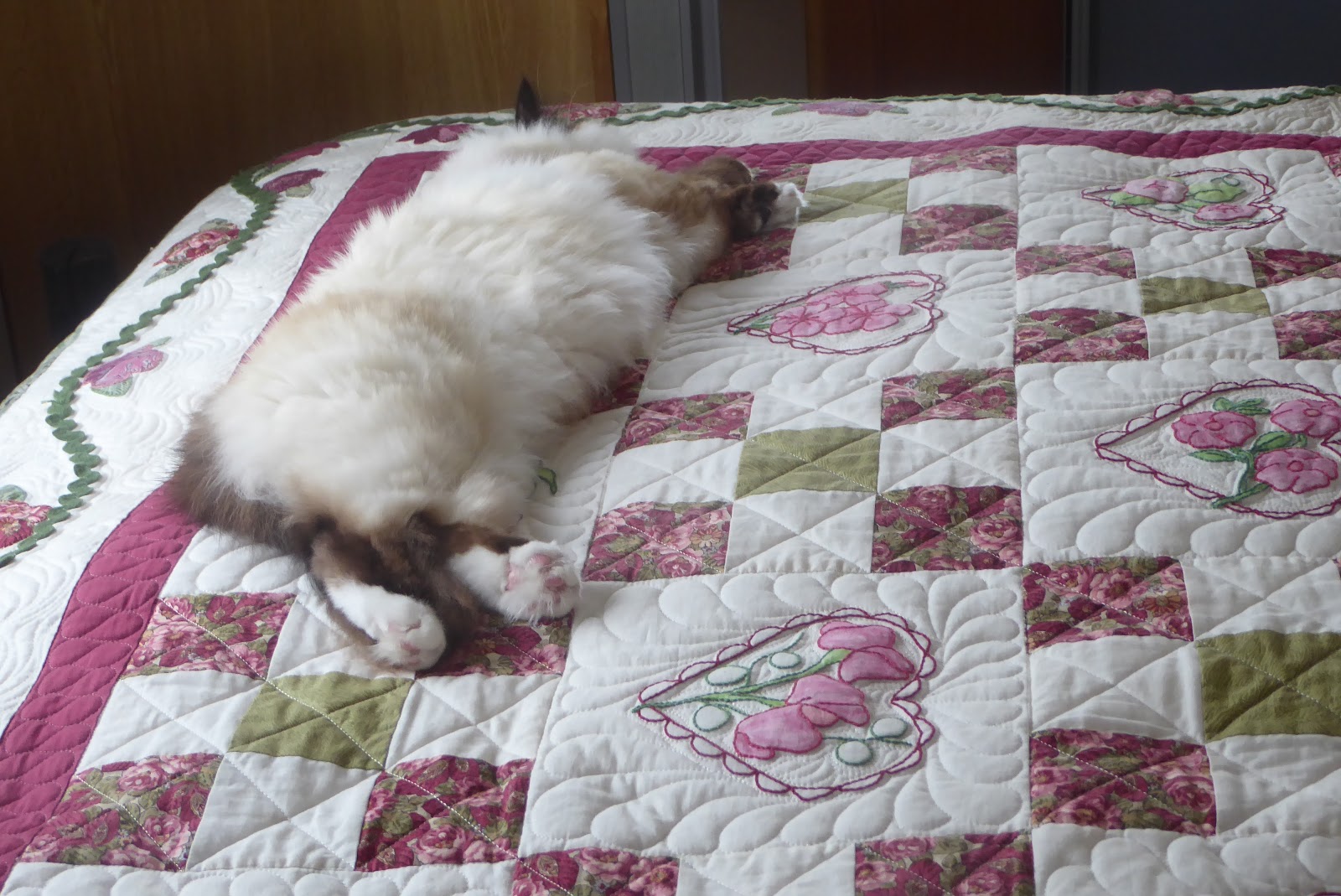 It’s tiring being on holiday!

She enjoyed some time outside (safely on her harness and lead) and played a game of hide and seek with Robin while hiding under the caravan step.  Here she is, poking her little paw out of the holes.  It’s just like she is saying “You can’t catch me!” 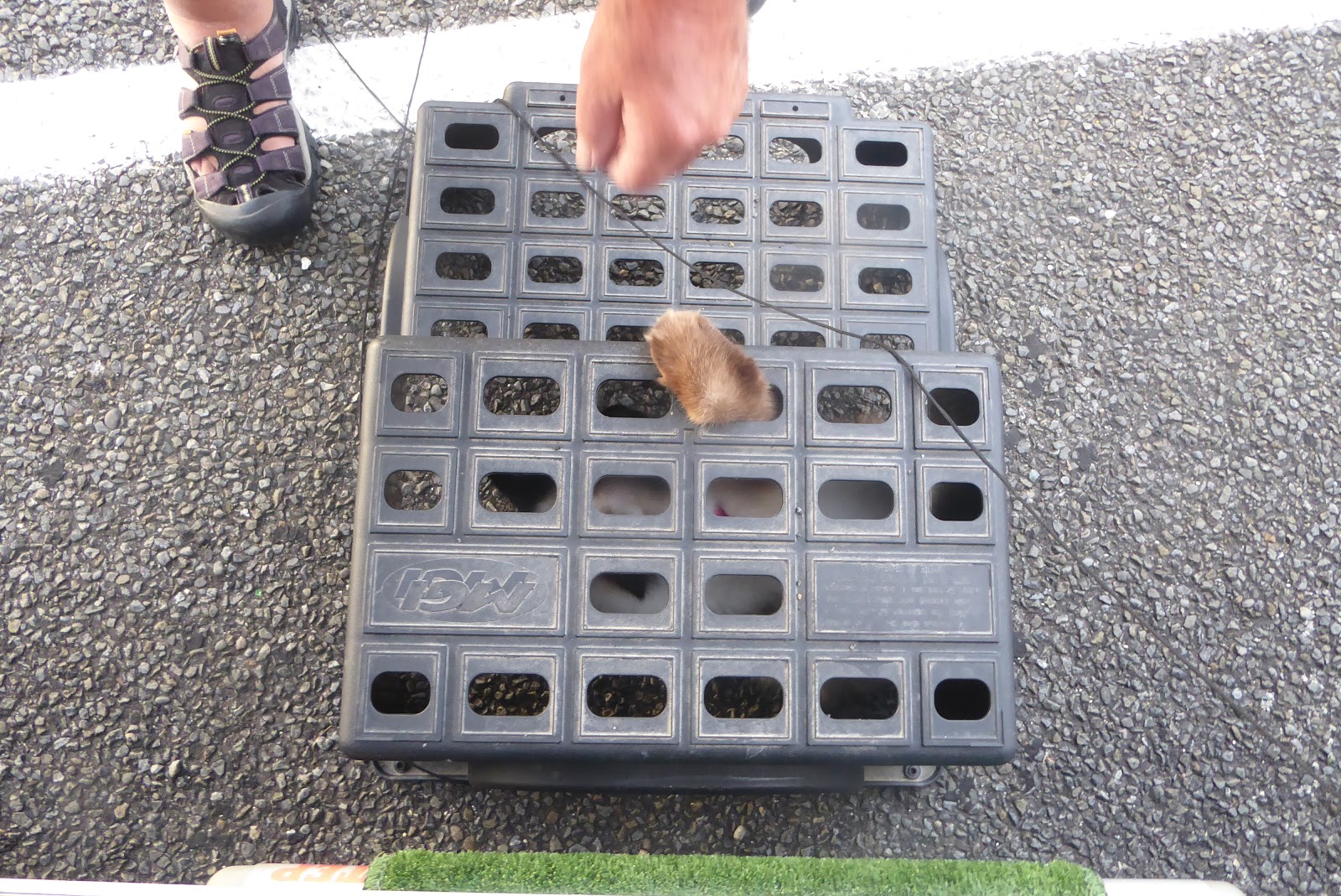 Hide and Seek with Gemma

Over the back fence we could see the colourful Blokarts from the Manawatu Blokart Club  as they were put through their paces.  Some of our group walked over to have a much closer look and came back declaring they would love to have a go at this sport sometime.  The carts really sped along in the wind as they tacked this way and that around the course. 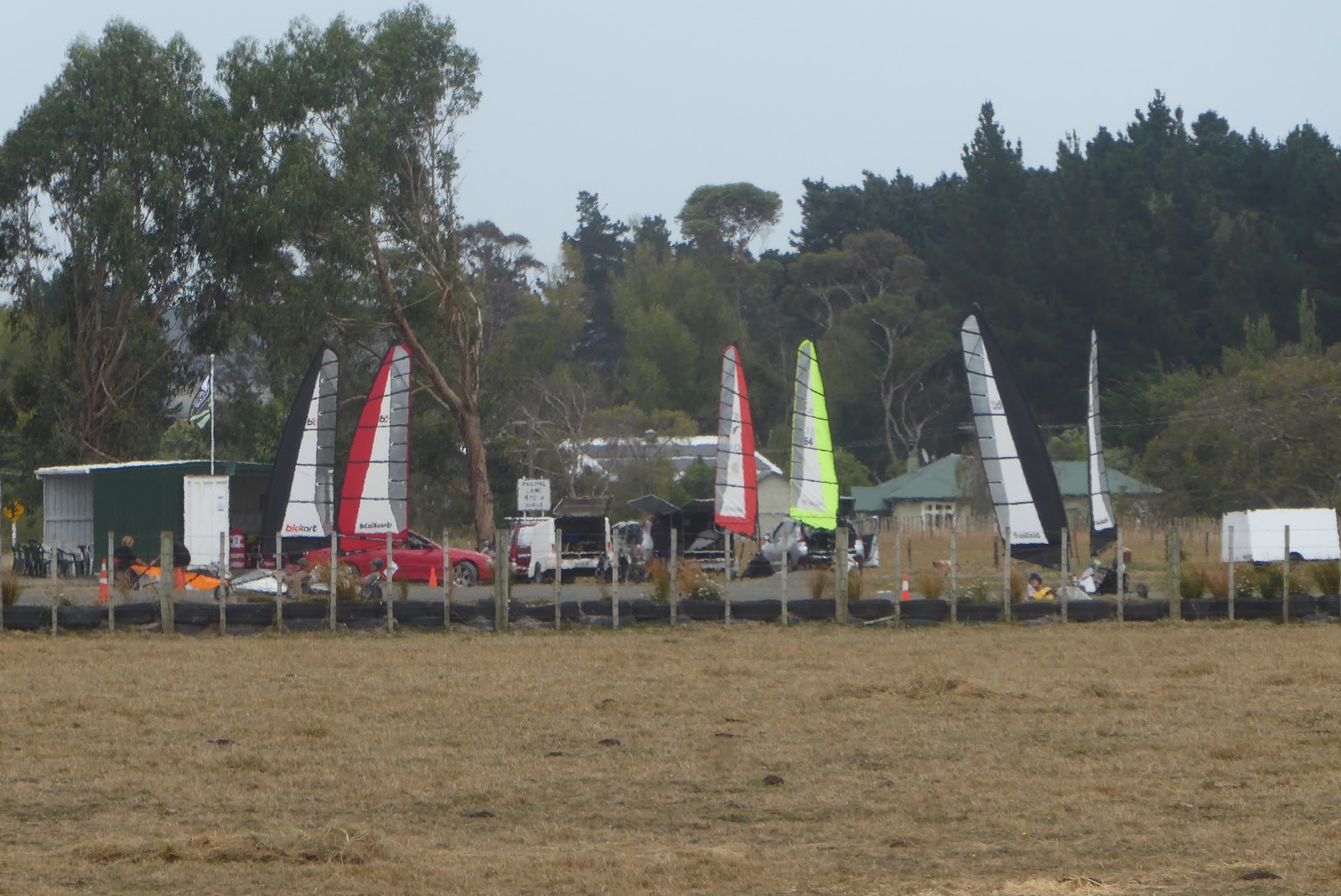 Being so close to Viv’s Kitchen, “world famous in Sanson” a group of us pooled cars and drove there for afternoon tea.  (I’m sure I’ve waxed lyrical about Viv’s Kitchen before).  Most chose a very large cream horn, and for a change, I tried a (new to me) Matchbox pastry, which took rather a lot of eating, I can tell you! 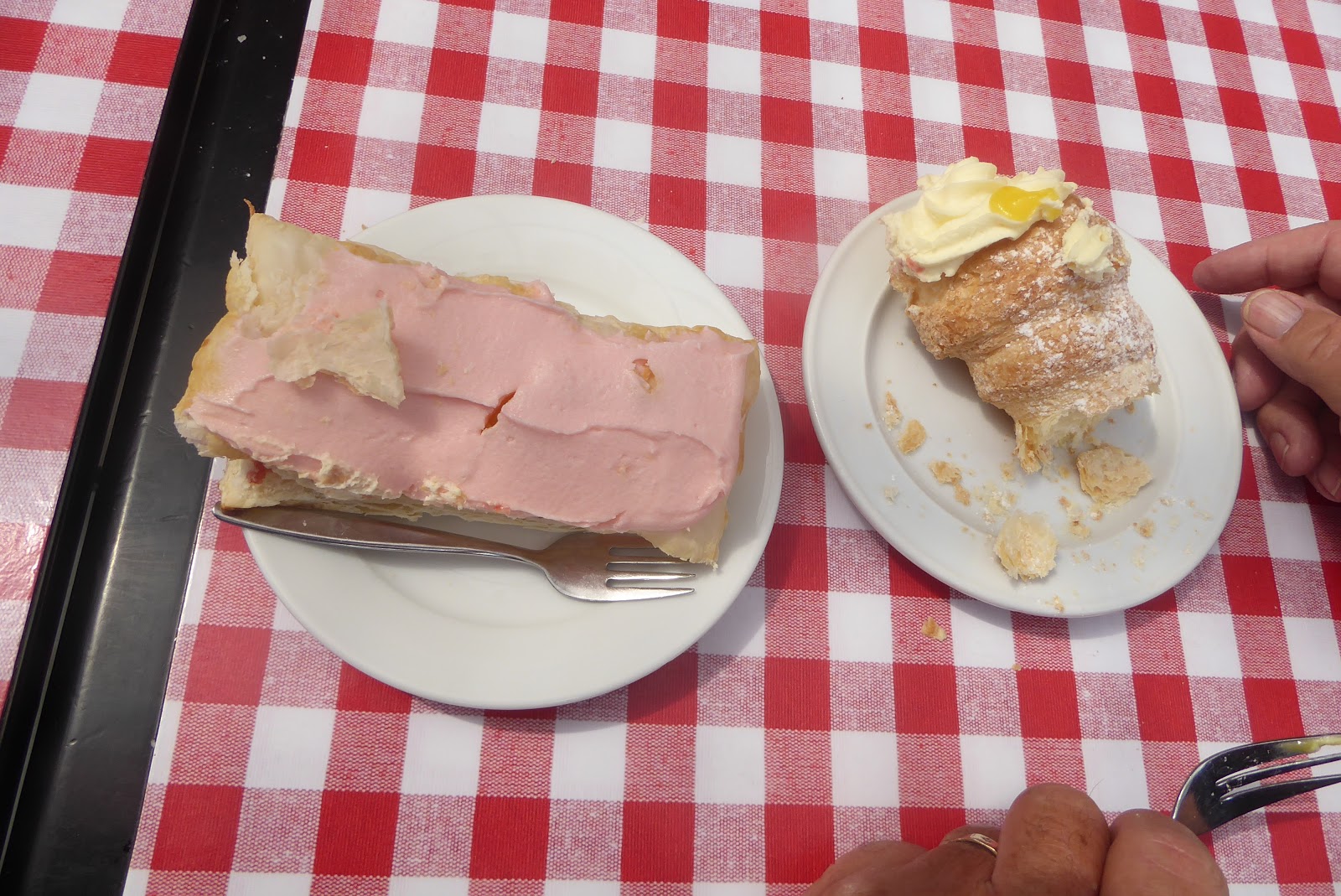 My Matchbox, and Robin had already started his Cream Horn.

There were several quizzes to test our brains over the weekend.  I did very well in the “Royal Brides” quiz, coming up with the most correct answers.  Such as:  who designed the wedding gowns for Diana and Princess Elizabeth, which royal bride had the longest train, and why weren’t Prince Phillip’s sisters invited to his wedding.  Luckily I had watched a couple of royal programmes on TV recently so remembered these facts.

The expected rain arrived just in time for packing up on Sunday morning.  Luckily the gale force winds which had been promised never arrived, so we really got off lightly.  There is nothing worse than towing a caravan in heavy wind.   The rain had eased to a drizzle when we arrived home and unpacked the van, so that wasn’t so bad.  Next rally – three weeks away and we will do it all again.

I plan to spend some time seated at the sewing machine this week – watch this space.
Posted by Jenny at 3:49 PM

Hi Jenny oh how lovely you got to take the van out again,looks like you all had a wonderful time and those cakes sure do look yummy,hope you have a wonderful Sunday my friend xx

What a lovely weekend! And that bakery, wow! I might have to schedule a stop off next time we head north!

You always have a great time when you are away. Lovely to see.

I've never heard of a Blokart, so I checked them out: they do look like great fun. Love that Gemma enjoys your caravan trips, too.

glad it didn't get too windy for your drive home - I know what those winds are like with camping - although we have a small motorhome we do tow a car and winds can really slow you down. Sounds like you had a good time.

what a nice getaway...i really like the looks of that cream horn--yum..hugs, Julierose

Sounds like a good weekend.
We got rather wet here in Timaru, but nowhere near as bad as some places and no gale force winds either.

Lovely weekend away and you make my mouth water with those yummy treats.